Full of Funk and Punny as Heck: Sega Acquisitions

Posted on August 5, 2016 by hungrygoriya

There are a few games that I used to rent constantly as a kid, and one of them was Toejam and Earl in Panic on Funkotron for the Sega Genesis.  At the last few swaps, I’ve felt a bit like a broken record while asking almost every vendor for that game.  Anyone that had a copy didn’t have it in the condition that I wanted or was asking a ridiculous price for only the cartridge.  Things started looking up when someone in town had a complete-in-box copy of the game.  Unfortunately when I inquired about buying it, the guy selling suddenly changed his mind despite my best efforts to convince him that he should part with it.  His friend had told him that because it had its box and manual that it was a collector’s item and that he shouldn’t sell.  Sigh.  I bet it’s just sitting in his closet at home collecting dust.  After months with no luck searching for the game in the wild, I decided to bite the bullet and buy it with its box and manual online.  In addition to that game, I also ended up buying Earthworm Jim on Sega Genesis for my boyfriend.  We have the Super Nintendo version of Earthworm Jim, but it’s simply not as good or fun as the Sega version!  Here’s a picture of both games: 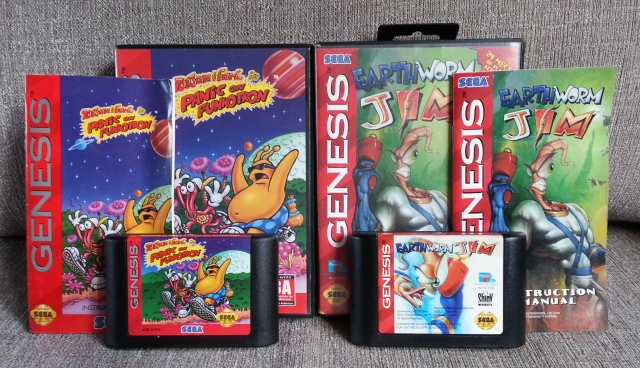 Both of these games captured my heart for similar reasons in my childhood.  Graphically, they are stunning.  Especially notable in Toejam and Earl, the quirkiness of the areas you play through are bright and colourful, as well as interesting with lots of interactivity.  There are so many different mechanics to implement in both games that it keeps things feeling fresh in each and every level.  Most importantly for me was the music.  I’ve never played a game so funk-filled as Toejam and Earl.  Its soundtrack is extremely unique from most other games from its time.  Earthworm Jim’s soundtrack is also packed with many varying music genres ranging from country to classical.  It was in fact the first game in which I heard recognizable classical music: Beethoven’s Moonlight Sonata backs the hilariously named level The Villi People (Earthworm Jim has to traverse internal organs, complete with villi… very punny!)  Both games are wonderful in their own right, and I’m happy to own them both!

The next swap is coming up quickly, so I’m hoping to get some new goodies soon.  I’ve been spending many evenings lately watching King of the Hill, but hopefully I’ll get back into a gaming groove soon.

11 Responses to Full of Funk and Punny as Heck: Sega Acquisitions