This Thanksgiving I am Thankful For…

Posted on October 5, 2016 by hungrygoriya

In light of my recent dry spell in retro game hunting, I’ve been turning to alternative sources to find games.  One website I found was an auction site that seemed promising.  After bowing out of a few auctions that pushed up past what I was willing to spend, I finally managed to win some!  To be quite honest, this experience was a nice change from eBay and other sites that arbitrarily assign prices to games (Lukie Games, anyone?)  These auctions all started at $3 and only went as high as people pushed them.  The unfortunate part is that there was a 15% auction fee that could have dangerously inflated higher-priced games very quickly.  I understand the purpose of these fees, especially in the case of some lower auction prices.  The company obviously has to ensure some potential profit margin and to pay people working for the company.  What I wasn’t expecting was to pay taxes on what I won!  Canadian taxes are 13% in my province, so with the auction fees it was pretty much 30% extra altogether.  I think I still got a good deal on what I picked up, but it would’ve been a better deal if I hadn’t had to pay taxes.

The first game I got from the auction was Kirby & the Amazing Mirror for Game Boy Advance.  I accidentally picked up Nightmare in Dream Land for GBA one time mistaking it for this one, and I’ve been on the hunt for it ever since.  I got this copy for $20.

The other game I got from the auction was Thousand Arms for PS1.  My desire to own and play PS1 RPGs is strong.  I’ve heard mixed opinions about Thousand Arms, but I think it’d be a fun game to play through.  In particular, I love the idea of the dating simulation aspect.  You apparently get to woo women in the game which in turn increases the strength of your various weapons.  I’m always pretty picky in video game dating simulations.  I once restarted Harvest Moon: Tree of Tranquility because I married the miner.  He was never home when I went to bed and didn’t make me a lunch in the mornings.  The fisherman though… he took good care of me.

Here’s a photo of the game, its instruction booklet and its discs.  Everything is in really excellent shape.  The discs look practically untouched.  I got this one for $65. 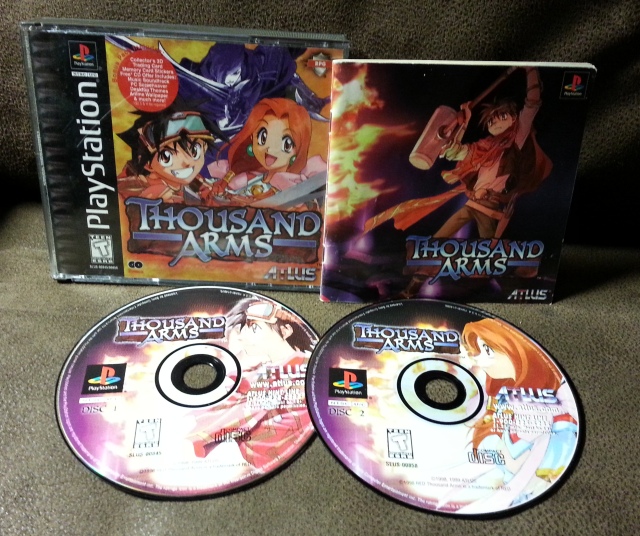 Interestingly, the previous owner didn’t mail away for free goodies (soundtrack, desktop backgrounds and other multimedia!)  I was very sad to see that the mail-in card was still attached in the manual.  It’s too bad that the offer expired in the year 2000.  I personally wouldn’t have missed out on an opportunity for free mail-in stuff, especially with only $2 shipping and handling!  What a steal!

I mentioned in my last post that I was interested in picking up a copy of Innocent Life: A Futuristic Harvest Moon.  I jumped on an opportunity when it arose on eBay and sure enough, I now own a copy of that game as well.  I managed to snag that one for $25 with shipping included.  The disc looks brand new, and the instruction manual was also included.  The case that the game came in was an old Blockbuster rental case.  I was pleasantly surprised!  I actually like having that little piece of history in my home! 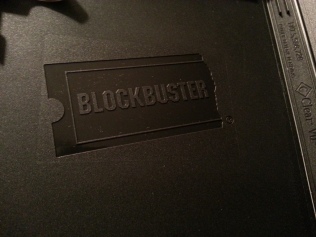 Last but certainly not least was a great discovery at a hock shop.  My boyfriend had spotted Shining Force for the Sega Genesis sitting in a pile of boxed games.  They wanted $65 for the game before taxes, but with a little schmoozing, I managed to get them to $65 with taxes in.  It was an incredibly steep price, but it’s really rare that I’ve seen any of the Shining Force games in town, nevermind in that condition!  Behold the glory of my complete copy of Shining Force!

Unfortunately, this is normally the time of year when people generally slow down with video game donations to used stores.  Yard sales are over and the spring/summer purging frenzy has drawn to a close.  I will continue to post as often as I come across things, but it will likely become less frequent.  If people are interested, I will do some posts on what already exists in our collection since there was so much that I had already found before starting this blog.

On the bright side, my boyfriend and I are trying to find another swap in the province to get to before the end of this year.  The prospects are grim since most venues would involve a tremendously long trip, but we are considering it just for fun!  The roads here are difficult to travel once snow settles in, so we are going to make the best of highway travel while we still can.

If I don’t manage to post again beforehand, I hope that you all enjoy a wonderful Thanksgiving weekend!  Per my usual Thanksgiving tradition, I will be watching the Peanuts Thanksgiving episodes on DVD with some kind of warm beverage followed by getting out to see some beautiful fall colours on the hiking trails.

20 Responses to This Thanksgiving I am Thankful For…