In an attempt to cheer me up after my two-day  couch-bound struggle with a tension headache, my boyfriend prodded me to the car and we took a drive through town to a couple of stores we haven’t been to lately.  One store we stopped off at is a mix of a hock shop and an antique store that has yielded some decent finds in the past.  The guy that runs the store knows us pretty well now.  He likes us so much that we sometimes get sneak peeks at games he has bought up before he puts them out if we catch him on the right day!  It’s a pretty awesome relationship.

The thing about this shop is that you can spend hours in it and keep seeing new things you didn’t notice before.  For example, this guy has had a shelf of Sega Master System games behind his cash since the first time we went in there (a few of which we’ve purchased), and today for the very first time we noticed he had a loose copy of Shinobi.  With a low price of $5, we decided to pick it up.  It’s pretty dirty and I didn’t get a chance to take the price sticker off or clean it before photographing it, but here it is: 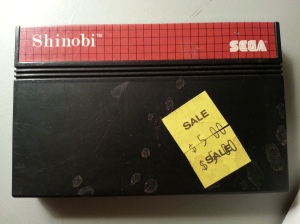 Shinobi is not at all my type of game, but I suppose it’ll make the Alex Kidd in Shinobi World make a little more sense to me now.

The second thing we found today was an absolute steal.  After staring at the wall near the Sega Master System games for a little while longer, my boyfriend spotted a Sega CD box.  It wasn’t your typical long box hard case that you might expect, but rather a cardboard case with a manual and disc for Sonic CD.  I’ve heard that Sonic CD is one of the best games on the system, so we immediately wanted to find out how much the owner wanted for it.  Our jaws just about hit the floor when he said $2!  We checked out the disc and it was in pretty terrible shape with deep scratches that ran throughout the entire disc.  We ended up buying the game anyway and crossed our fingers that it could be fixed up.  After spending an additional $3 at a hock shop that does disc resurfacing, the game now looks practically new except for a faint reminder of the horrible scratches.  We tested the game out and it is as good as new! 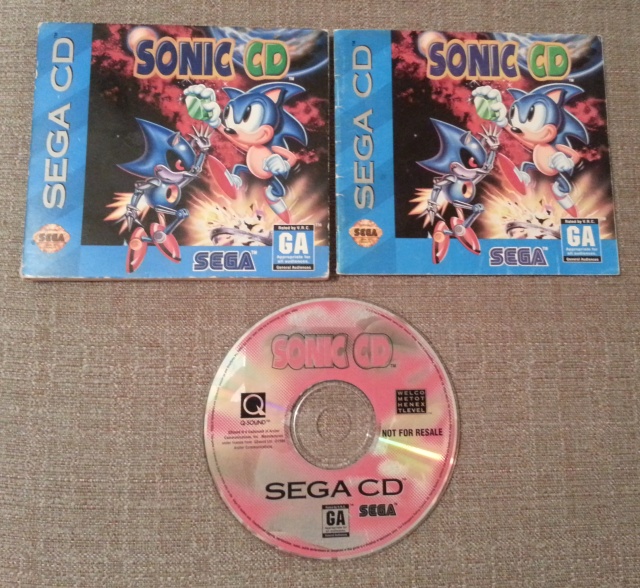 Some die-hards of Sonic CD might notice that this disc is red instead of blue and that it’s a Not For Resale copy.  After a little research, I found out that this copy was a pack-in that was sold with the Sega Genesis CDX console, which explains its lack of normal case, etc.  As far as I understand, the game is the same as the normal version for the Sega CD, and that’ll normally run at least $30 complete online.  For $5 total after resurfacing, this was truly a great deal!  As a pretty dedicated Sonic fan, I was super pleased to add this to our collection.

For those of you that read my last post, acquiring the massive gaming lot of 450+ games and consoles is not looking good.  The guy decided to price out every item in his collection and came out with a staggering figure of almost $8000 USD.  My offer to him was far, far below that.  I’m not anticipating getting that lot of games, but thank you to everyone who sent me encouragement and all of their luck!  I really appreciate it!  As an eternal optimist and vivacious opportunity-taker, I restated my original offer to the seller today and am hoping that everyone else runs for the hills when they see how much he wants, leaving my offer as the only one standing.  It’s a long shot, but if I get this I’ll never have to spend money on games again.  I’ll have enough trades up my sleeve to negotiate just about anything I want at future swaps.