Posted on November 2, 2016 by hungrygoriya

After the disappointments of missing out on the last two game exchange events either in part or entirely, I was determined to get out to the last long distance swap we had been planning to go to for this year.  Where I live in Canada, we are very restricted with travel in the wintertime because the highway conditions become atrocious.  Travelling long distances out of town on treacherous highways for the sake of video game hunting is a huge risk that we are both not willing to take.  There will be one more swap much closer in proximity that we might get to in a few weeks, but nothing that will involve 10 hours in the car like this one did.

I went to this one alone.  My boyfriend had been pumped to come along but awoke on the morning of departure with glassy eyes and swollen neck glands.  After I tucked him back into bed and got on the road, I made it to the swap only 30 minutes after its start time.  Boy oh boy was I ever in for a treat!  The swap was a smaller one with 50ish vendor tables, and thankfully most of the vendors were actually dealing games rather than other game-related merchandise.  I love people’s art and various gaming-related creations, but I’m definitely a person who goes to these things looking for games.

There was a vendor table with a bunch of game manuals strewn about in a haphazard way.  I’m always picking up manuals for games I own loose.  I bought the manuals for Super Mario World and Super Mario All-Stars for SNES, and Adventure Island for NES.  In total, these three gems cost me $7!  They were in very good shape.  The Super Mario World manual is the Canadian version, so it’s double the size because it also has French language instructions.

At the same table, there was a copy of Hey You, Pikachu for $5.  This game has skyrocketed in price because of the renewed popularity of Pokemon, but unfortunately stores don’t seem to realize what the game actually is.  The game on its own is useless as it requires a receiver and a mic for the N64 to play.  Nobody seems to have them where I live, nor could I find any at the swap.  I bought the game in hopes of someday finding the mic and receiver for a decent price.  How fun would it be to talk to Pikachu?  Think of all the things we’d have to talk about!  Here is a photo of the cartridge that came to me in excellent condition.  For the record, I saw another copy of the game a few tables over going for $40.  I think I got this game for an excellent deal and I’m glad I scooped it up in time.

I had really excellent luck finding a some great games for the Sega Genesis.  There were a few I passed up on and am still feeling a little regret over not getting like Phantasy Star IV with its box but no manual/map and a really beat up copy of Shining Force II.  The games that I did buy were good titles in really great shape, and I’ve put them all into a group photo for your viewing pleasure below.

I found a beat up copy of Where in Time is Carmen Sandiego and Rocket Knight Adventures for my boyfriend for $5 and $20, respectively.  I was happy to find Rocket Knight Adventures for this great price in good condition since we had been tempted to pick up a copy with a faded label for double the price the other day.  I’m very glad we resisted!  Ristar was another game I snagged and I paid $30 for that one.  I’ve heard that it is an excellent platformer, and it was another game to cross off my boyfriend’s list.

For me, I added to my Phantasy Star collection by grabbing Phantasy Star II with its manual and box, but it didn’t include its map.  Everything was in excellent shape, and for some reason I can’t remember how much I paid.  I think it was $20-$30.  I only need to find the first and fourth installments of this game series now!

One of the most exciting finds of the day for me was that lovely cartridge in the middle of the above photo: Crusader of Centy!  This is an extremely rare Sega Genesis game, fabled to be about the third-rarest for the system.  The label is obviously torn, but there are very few copies up for purchase online.  The ones that are available come at an extremely high price!  A quick search shows this game’s value running from $200+, and even reproductions of this game fetch a pretty penny.  The vendor seemed skeptical when I started examining his cartridge and began explaining to me how rare and expensive the game was as if I didn’t know what I was holding.  I pretty much told him to save his breath and proceeded to wrangle him down to $160, which was a total steal for this game.  When I got it home, I opened it up to check its authenticity, and sure enough, it’s all fine and good.  Here is a photo of the label and the PCB.

So exciting!  It’s an action RPG game that is often called a “Zelda clone”.  It has a lot of unique characteristics, a wonderful soundtrack and great graphics.  I think it’ll be fun to play through.

As you all know, I’ve been searching for SNES RPGs and am nearing the end of my collecting for those.  I collect them loose so that I can afford more of them, and one in particular I had been interested in picking up was Robotrek.  I’ve read a lot about the game and watched lots of reviews, and despite having one of the most annoying battle themes I’ve ever heard, it looked like something I’d enjoy immensely.  I found a vendor that had not one but four copies of the game (two complete in box and two loose.)  He wanted to charge me $80 for a loose copy.  I scoffed at his ridiculous price and skulked away trying to find a better deal.  By the end of the day, no better deals were in sight, so I decided to try to appeal to the vendor.  I explained how far I had travelled and how I could’ve stayed at home on my couch and had the game delivered to my door for his asking price of $80 (shipping in).  I also pointed out that one of their loose cartridges had some scratches on the label in hopes that they’d cut me a deal.  They finally did, but only by a little.  I picked up Robotrek for $70.  It was much more than I wanted to spend on this game, but after looking for it at several events and finding nothing, I felt like it was a good decision. 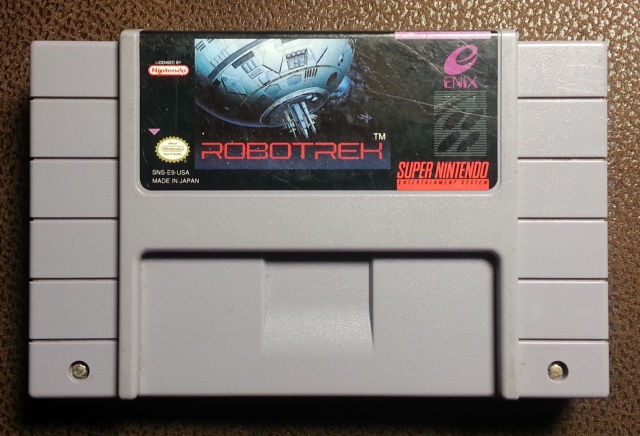 Final Fantasy II is another RPG I’ve been trying to find, but I have been waiting patiently for a deal on the price.  I’ve seen many copies around at $60-$70.  I finally managed to find one for $50 at this event in the greatest condition I’ve seen yet, so I pounced.  I’ve played this game through a few times on the PS1 compilation disc called Final Fantasy Chronicles, but I’m excited to try it out on SNES.  It is one of my favourite Final Fantasy games, so I was pretty happy to finally be able to add it to my collection.

Finally, the last thing I found today was Ogre Battle: The March of the Black Queen for SNES.  This is a game I’ve heard many people rave about, talking of how deeply involved the gameplay is and how the multiple endings of the game make it extremely replayable.  Although I’m not normally a real-time strategy fanatic, I think I can get behind one title that set the stage for many other games of its kind to follow in its footsteps.  With no manual or box in sight, the game was priced at a whopping $180.  I pleaded with the sellers and pointed out some label damage to them that I thought would bring down its price a little.  It also helped that I picked up FFII from them too, so they were amenable to flexing the price for me.  They wouldn’t go any lower than $150.  It was more than I wanted to spend on one game, but I’m okay with it.  I got some great deals on other things that day, so in the end I feel like it all balanced out.  Here’s a photo of Ogre Battle.

I am thrilled at having had so much success at one event.  For the first time ever, I actually spent out all the money I brought along, and truly feel like I got a really great deal on some stuff.  I’m still on the lookout for a few games that were heinously overpriced there like Skies of Arcadia (Legends) and Secret of Evermore, but hopefully I’ll run into them soon enough.  In the meantime, it’s back to hunting locally and trying to start streaming gameplay of my backlog more regularly.  I’m hoping this winter will be a pretty solid start to tackling my backlog!

Thanks for reading, as always!