This past weekend I made it out to a small event that wasn’t only focused on video games, but also on many other facets of Geek Culture such as card games, table top gaming, and comics.  I can’t say that I dabble at all in the latter three, but it was interesting to see so many people come together around those activities.  I’m starting to learn a little more about them by following a few blogs here, even if it’s only a passive absorption of information.  There were only three video game vendors at the event, and I made sure to visit their tables multiple times.  I even shook hands with a vendor I’ve seen a few times at other swaps, and now we are on a first name basis!  Pretty great!

One man’s table had a raffle for an NES Classic Edition, which I entered but didn’t end up winning.  He didn’t draw at the event, so for all I know he just took all the money home with him and laughed all the way to the bank.  The same vendor also had a Mystery Bag attraction where he had shoved 150 games into a sleeping bag and was asking people to pay $5 to stick their arms in and pull out something from inside.  There were games available to win from most consoles that I’m interested in as well as gift certificates to the table.  I must’ve rummaged around in there for a good two minutes looking for something that felt like an NES or an SNES cartridge, and finally I found one.  When I pulled it out, it was the grungiest, dirtiest most awful game I could’ve picked for myself: NHLPA Hockey for the SNES.  I won’t even taint your day with a photo of it because it’s a really, really gross cartridge.  I am trying really hard not to think about what else I might have unknowingly touched in there.

Despite the willies-inducing mystery bag experience, I did find a few interesting things.  There was a table of SNES games that was jam-packed with great deals (for once!) and I got a copy of Super Bomberman 2 and The Lost Vikings for $60.  Both cartridges are in great shape.  I normally would’ve tried to wrangle a deal out of some of the vendors here, but since this was the first time this particular event has ever run, I wanted to support them so that they might be inclined to come back again next year.  I did manage to save $5, which is still a savings at the end of the day!  Here are the two games: 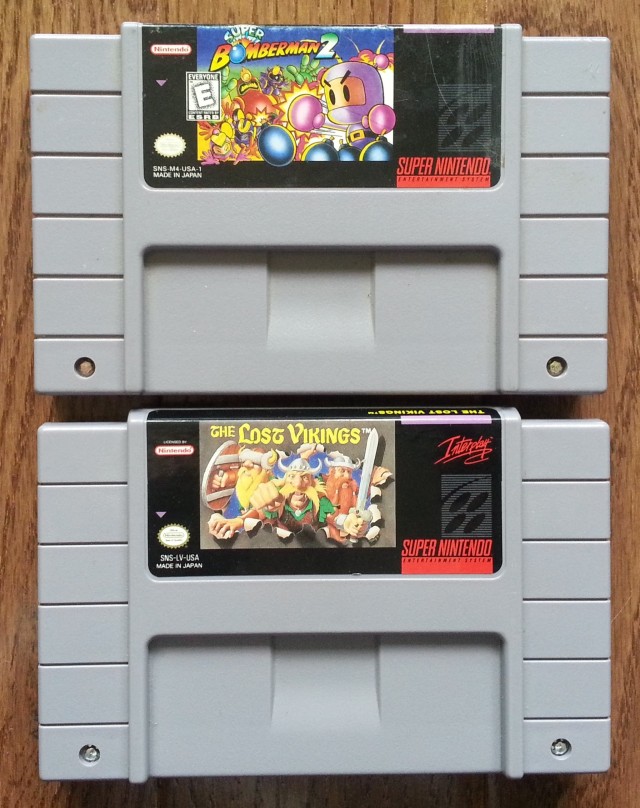 I used to play the first Super Bomberman with a good friend as a kid and loved it!  She also had Mario Paint and we always played Gnat Attack together too.  I was the friend who would go and visit her and she would know to go and get out the Nintendo.  I only had an NES and a Sega Genesis growing up, so this was the only chance I had to play some of these other games.  I’m glad I had the privilege of getting a taste of the SNES in my youth.  Based on my impressions of the first Super Bomberman, I’m sure the second will be good too.  I’ve heard it has only added and improved upon the first game.  The Lost Vikings looks like a fun puzzle game as well.  I own it on Steam, but took the plunge for a cartridge copy!

I think the most exciting thing I found was a boxed copy of The Legend of Zelda: Link’s Awakening that also came with its manual!  I have been eyeballing a boxed copy of this game at a local hock shop for months, and they are asking $80 without tax, which was plenty more than I was willing to pay.  I bought my copy from a hard-of-hearing older man whose son did a lot of repeating to him on my behalf.  They sold it to me for $70 (they were asking $80 but came down a bit for me), and all of it is in good condition.  For anyone wondering, I got the original Game Boy game and not the Game Boy Colour release.  I’d like to own the GBC version and play that at some point since I understand it has additional content, but I’m quite happy with a complete copy of the original.  Link’s Awakening was one of the first games I fell in love with and I would say is my favourite Zelda game (so far, anyway).  It’s a game I’ve played through many times and am looking forward to playing again!

That wraps up the last swap of 2016.  Snow will be here any time now, and I don’t know that people actually host these kinds of events in the winter months at all.  I’ve never seen advertising for them, anyway.  Now we transcend into the darkness of The Wintertime Game-Finding Void.  Sigh.  I already can’t wait for Spring.

22 Responses to Nintendo Stuff – Last Swap of the Year