I recently found an eBay listing that I couldn’t get out of my head.  I know that sounds crazy, but it’s true.  It was a beautiful lot of Sega Master System games that someone was taking offers on.  The games were mint condition RPGs (and similar like rogue-like, action RPGs, etc.), complete in box with maps and manuals.  There were three games in there that I’ve been searching for over the last year or so to no avail and on top of that, there were also eight other RPG-style games for the taking that I had read up on in the past and thought might be worth a look.  I knew that if I bought this lot of games, I’d obtain nearly all the Sega Master System RPGs in one fell swoop.

Dream come true, right?  My problem was in the amount of money the seller wanted for this game lot.  After a little bit of wrangling and sending in a few counter-offers, the guy settled on $675 with me.  As much as I almost never drop huge amounts of cash on games like this, for me, this was worth it.  I put aside money each month for game collecting and with things slowing down for winter, I had some unspent cash left over.  For 11 games for $675, it was like I was paying full price for 11 brand new games.  Considering that some are fairly rare and that they are all in complete and amazing mint condition, I didn’t mind so much.

I suppose I will group the games into their style categories to organize things a little bit.  I’ll start with the one and only rogue-like game in the bunch, Dragon Crystal.  I haven’t personally played a lot of rogue-like games, but from what I gather from watching reviews of many different ones, they’re ruthless.  They deliberately leave you in the dark about what items are intended for, and it’s a tremendous feat built on a shaky foundation of  trial and error.  This game by far has some of the nicest Sega Master System box art I’ve ever seen.

The second type of game in this excellent group are turn-based RPGs and the first one I will mention here is Ultima IV.  The Ultima games are some of the oldest RPGs I personally know of, and I think many RPGs that followed them borrowed heavily from the series.  From what I’ve gathered, Ultima IV is a quest in the traditional sense but also introduced a morality system alongside the open world exploration and combat from earlier installments in the series.  I had a chance to pick up some of the earlier Ultima games in floppy disk form last summer but passed.  Those magnetic-based mediums are unpredictable, and the thrift store had them priced way too high for my taste (plus, I didn’t have a Commodore to play them on!)  Here’s some photos of Ultima IV and its game map. 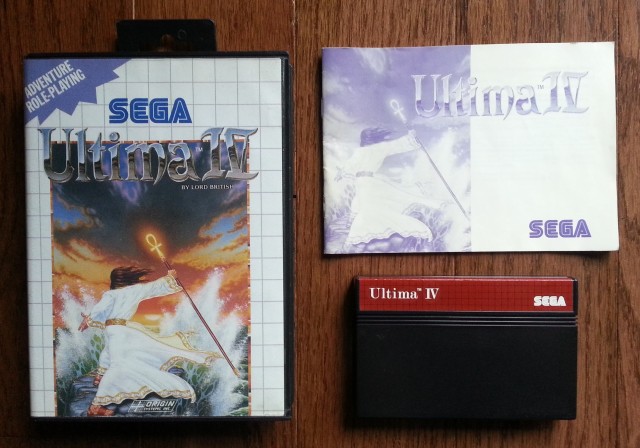 Miracle Warriors – Seal of the Dark Lord is one of the earlier 8-bit RPGs to hit the system and also involves turn-based combat.  Like Ultima IV, your actions in this game are of consequence later on and can alter your reputation with NPCs.  At first glance, this game seems daunting because you have limited perspective on what’s around you.  The “overworld” is limited to a small 9×9 tile map at the top of your screen that you can move about with and see what’s around you, but thankfully the game came with an absolutely beautiful map.  It’s a thicker paper and quite enormous compared to what you might normally expect!  Have a look below to see the game and its gorgeous map.

Another well-known turn-based RPG from this lot is Phantasy Star.  If you’ve been following my swap posts, you’ll know that I’ve recently picked up Phantasy Star II and III and have been itching to get my hands on the first installment for quite some time.  I’ve always seen it for sale with its case or as a lone cartridge, but never complete.  I love the idea of first-person perspective dungeons mixed with traditional overhead world maps and towns.  When I popped this game into the Sega Master System, it didn’t start up right away and I got an error screen.  It took a good scrubbing, but it seems to work fine now.  Thank goodness!  This was one of the main reasons I wanted this lot so badly.  Here’s a photo of the cartridge, its manual and the game case.

The rest of the games on this list can be broadly classified as Action RPGs or Action Adventure depending on how you slice them.  I’ll start with two of the Wonder Boy games: Wonder Boy in Monster Land and Wonder Boy III: The Dragon’s Trap.  These two games are side-scrolling action RPGs with many enemies to fight and shops along the way.  They remind me of a weird Adventure Island/Little Nemo Dream Master fusion with towns and other RPG elements sprinkled on top.  From what I understand, the Monster Land game is much more linear whereas The Dragon’s Trap leans heavily towards a Metroidvania approach.  They are staples in any Master System collection, so I’m quite happy to have found them here in such excellent condition.

SpellCaster is another game with side-scrolling action sequences combined with a unique point-and-click component.  In addition to this, there are towns and people to talk to in between.  From a quick glance at some reviews online, this is easily some people’s favourite game on the system.  I played the beginning of the game while testing it, and I’m really curious to find out what all the fuss is about.  I paid no attention to the story at all, but from my initial impression, all I can say that some of the music comes off as a bit grating.  I’m sure it gets better. 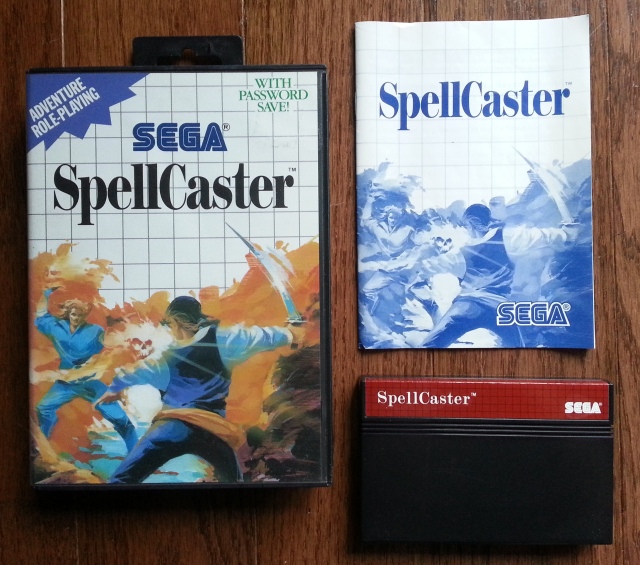 Lord of the Sword is another game that can be classified as an action-adventure game with some RPG elements.  There is much side-scrolling action to be had along with towns and shops along the way.  This one reminds me a little of Faxanadu for the NES in both its style and layout.  I’ve heard that this game is difficult because it has a limited number of continues as opposed to a password system or save feature.  For a longer game, this can obviously become problematic.  I’m hoping that after getting a feel for the controls and beginning to recognize enemy patterns that I’ll be able to get through it without hitting a Game Over. 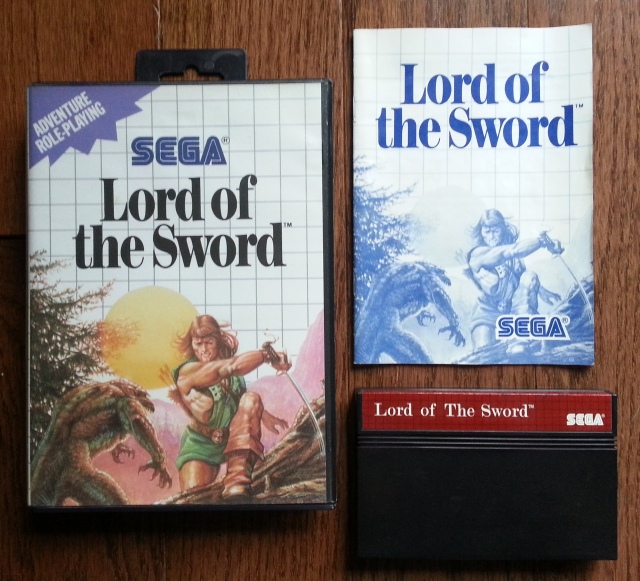 Within the last six months or so, I discovered the Ys series for the first time.  I do so much reading about this stuff that if you asked me how or when I found out about it, I couldn’t tell you.  I was happy to grab a copy of Ys III: Wanderers from Ys recently from a swap and have been determined ever since to track down its predecessors.  Much to my dismay, there are not many options available for getting Ys II in English unless it was purchased together with the first game on a handheld.  The choices were for Nintendo DS or for PSP.  I’m hoping to stream my gameplay of many RPGs in the coming months while things are quiet with collecting, and the DS doesn’t have an output for streaming.  Frankly, I’m not sure how to go about it with the PSP either.  Not to mention the price of these compilations!  Both games are quite expensive!  These compilations are also remakes, and the reviews on the gameplay/appearance/music changes are mixed.

Either way though, I did get a copy of the first Ys game in this game lot, and it’s called Ys: The Vanished Omens.  It’s a top-down action RPG where you simply bump into enemies to harm them with whatever weapon you have equipped.  The angle that you attack from dictates how much damage they (and you) take in combat.  The music in this game is phenomenal and I’ve been humming it all week since I popped it in to test it.  We just downloaded a copy of the TurboGrafx CD compilation of both games to see if I like the second one enough to try to find a legitimate copy of it sometime.  Here’s a photo of the first Ys game for Sega Master System.

There are two games from this lot that are generally classified as “Zelda clones”, but I beg to differ.  Sure, there are some similarities, but they end at parallels in graphics and gameplay mechanics as far as I’m concerned.  How many ways can you really depict bushes, rocks and the outdoors on an 8-bit system?  I digress.  Golvellius – Valley of Doom is the first and it’s a top-down action RPG with some side-scrolling action segments.  Its gameplay mechanic is a mashup between the first and second Zelda installments on the NES.  You’re fighting monsters on top-down perspective overworld, but when you go into labyrinths, you’re travelling in a sidescrolling fashion and whacking enemies with a weapon.  I obviously love Zelda, and for many people that didn’t own a Nintendo, this was their Zelda!  I will be excited to try it out when I finally get around to it. 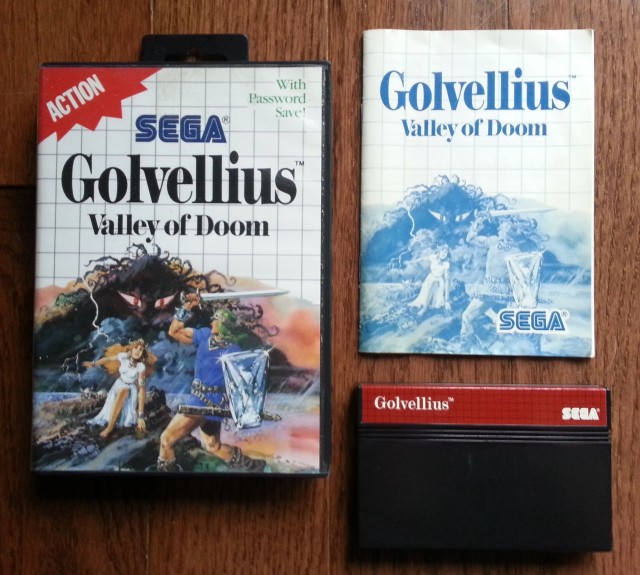 I’ve saved the best for last.  The second “Zelda clone” is Golden Axe Warrior, a game I discovered for the first time in a Sega Master System Review video by Game Sack.  Intrigued since at the time we had just bought our SMS, I had taken a look online to see what its price point was.  As usual, it was tremendously expensive.  Over the last year, I’ve been searching high and low for this game at swaps and have never come across it even as a loose cartridge.  It’s fairly rare and there are no copies of it available on eBay in North America at the time of this post.  Ones that are available internationally come with the case and no manual.  This wonderful person on eBay had a complete version of the game and it was in practically brand new condition. 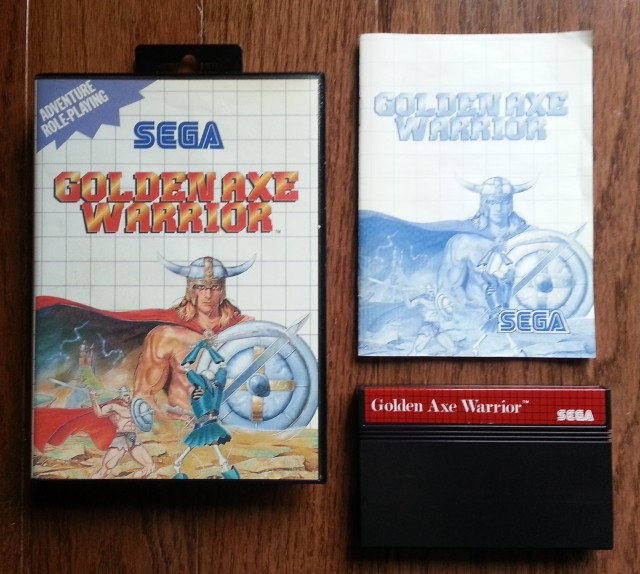 The gameplay looks awesome.  You play as a character from Golden Axe, but you set out to avenge the death of your parents.  It has about as much obscurity as the original Legend of Zelda and has great visuals and fluid gameplay.  I can’t wait to try this one out!  I’m so glad to finally own it!  Between this and my recent find of Crusader of Centy for the Sega Genesis, I’ve killed off two of the three rarest games I want to own and play.  The last one left that I want to track down is Snatcher for the Sega CD, and that one on its own will cost a small fortune if I can find it.

Though I was initially a bit torn about dropping so much money on these games, I’m at peace with it now.  I own a rare bit of gaming history and will have the privilege to play these games legitimately the way that they were meant to be played.  I hope you’ve all enjoyed seeing this group of games.  I’m happy to finally be able to give some love to Sega here.  Though I grew up with a Sega Genesis, before this past year, I didn’t even know that the Sega Master System existed!  Now my world has been blown wide open with an entire library of games I’m discovering for the very first time.  It is a truly exciting thing!

Thanks so much for reading this lengthy post!  Enjoy what’s left of the weekend!