There are a few games I’ve been wanting to own for a long while now but haven’t gone out of my way to find.  Most of them are rarer and don’t come up often in the flesh, and others are much more common but are heinously expensive.  When I’ve seen the more common ones at swaps or on the local classifieds site, I can’t really justify dishing out so much money for one game and often get blown off while trying to haggle.  I’ve always put buying these games off in hopes of finding them for $2 at a yard sale or something, but so far no good!  This is why I’m a big fan of package deals when possible.  Sometimes things work out pretty nicely for me when everything comes out of the woodwork at the same time.  Last weekend was one of those times.

We travelled to a nearby town since we had some good driving weather and did our usual rounds at the usual shops we like to go to.  We were met by empty shelves at the thrift stores and ignorance at some other pawn shops.  Just as my faith in mankind was waning, my boyfriend reminded me of my new favourite store in that city – I had almost forgotten about this awesome store that deals in all forms of geekery and has recently taken the plunge into wheeling and dealing retro video games.  We arrived and after making nice with the store owner, I found myself totally blown away by the fact that three games I’d been searching for were all in the same place at the same time, and in beautiful shape.

The first was Chrono Trigger.  This is my common but heinously expensive game that I’ve been wanting to buy on the SNES since practically forever ago.  The other thing is that I’ve already played it on the Final Fantasy Chronicles compilation for PS1, but the load times between battles were painfully slow.  They were so slow in fact that it really took away from my experience playing it, and that’s really the main reason why I’ve never started a new game plus.  This is not an issue on the SNES version at all.  In the past year or so, I haven’t seen the SNES version anywhere below $180, and hell if I was going to pay that much for it!  The shop vendor had the game marked at $180, but it came with a custom plastic case.  To me, I could’ve taken or left the case, but I couldn’t get away from the flawless condition.  I started my game pile with that one and continued shopping.  Behold its loveliness!  The label is a tiny bit crooked, but it’s in immaculate shape. 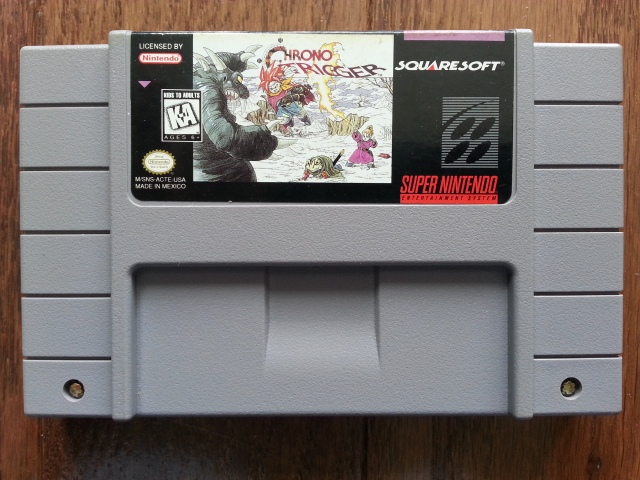 A rare game I’ve wanted to pick up for eventual perusal is Ogre Battle 64: Person of Lordly Caliber.  This game is one that I’ve never actually seen in person at a swap or at a store, and it was also more exciting for me since I had already purchased its predecessor on the SNES – Ogre Battle: March of the Black Queen – this past summer.  The game was published by Atlus, a company notorious for having small release numbers for many of their games.  Like Chrono Trigger above, the condition of the game was near flawless so I scooped it up as well.  I’m really interested in trying out some tactical RPGs, and from what I’ve read and watched about Ogre Battle 64, it’s one of the very best of the genre, if at not least one of the very best games for the N64. 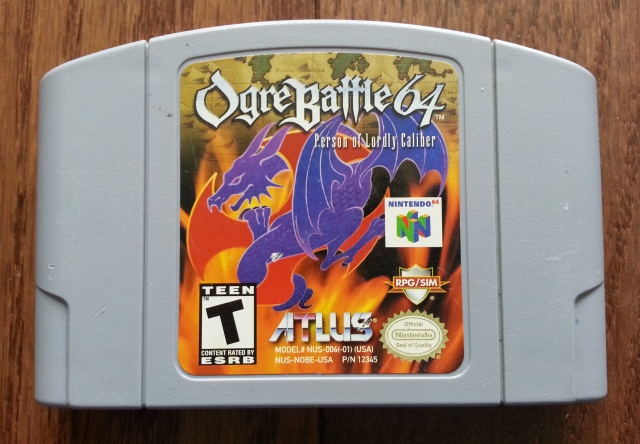 One of the games I was very excited to see in person was Super Adventure Island II for the SNES.  I’m not very quiet about how much I love the Adventure Island series!  When I picked up Super Adventure Island (also for SNES) this past summer, I felt a little disappointed.  The game was really short and paled in comparison to my favourite of the series, Adventure Island II on the NES.  Although it was true to many of the themes in previous games in the series, it stood out for all the wrong reasons with the exception of its phenomenal soundtrack.  I had heard about Super Adventure Island II and how it diverged from the usual “find fruit and kill things” formula.  It was supposed to be more akin to games like Metroid where you had to discover new skills and abilities to move forward in areas you couldn’t get to or through before.  There are also many RPG elements in the game including a weapons and armour system, currency, and magic!  I don’t know how an Adventure Island game had managed to converge with my favourite genre, but it did.  And it was there in front of my very face in the store, again in the best condition I’ve ever seen it.  It might as well have been sparkling under a spotlight with many angels singing, or something similarly cliche.  I added it to my game pile as well. 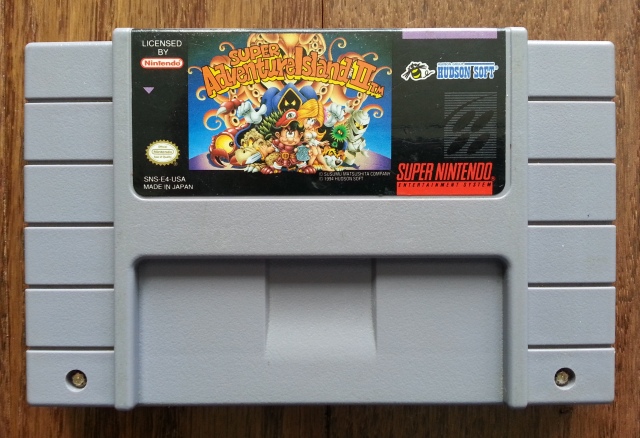 The other two games I picked up were for disc-based consoles, namely Playstation and Playstation 2.  I found Alundra 2 there, as well as Star Ocean: Till the End of Time.  I own Alundra and recently bought a reproduction cartridge of Star Ocean for SNES, so these two games made a lot of sense to buy.  Alundra 2 came complete while the Star Ocean game was missing its manual.  I was a little freaked out after getting home when I noticed that Star Ocean was the French version (it said so quietly on the back instead of plainly on the front where it should’ve been stated.)  I don’t speak French and was hoping that it wasn’t a French language version of the game, and thankfully it wasn’t!  I dodged a bullet there!  I honestly don’t know what’s so French about it, but I’m guessing there’s some option somewhere inside to change the language. 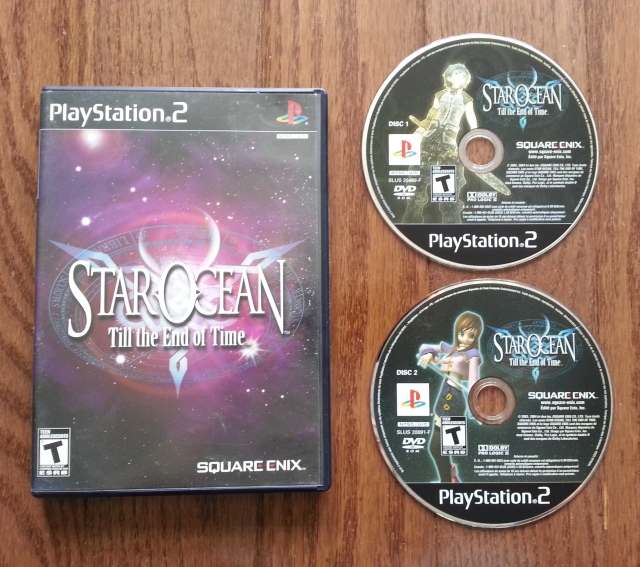 The last thing we found was my boyfriend’s pick, a Sega Genesis game called Flashback: The Quest for Identity. This was a game that neither of us had heard of but decided to bite the bullet on because of the awesome price.  When we got home and I sat down to test out the game, I was shocked and appalled to see that it was made with the engine for Prince of Persia, one of my personal most-hated games of all time.  I won’t get into why I despise Prince of Persia so much for the moment, but I can say in testing Flashback, it brought all my feelings of rage and frustration back in a few moments of trying to maneuver the main character through the stage.  The box and game were in good shape, so I certainly can’t complain. 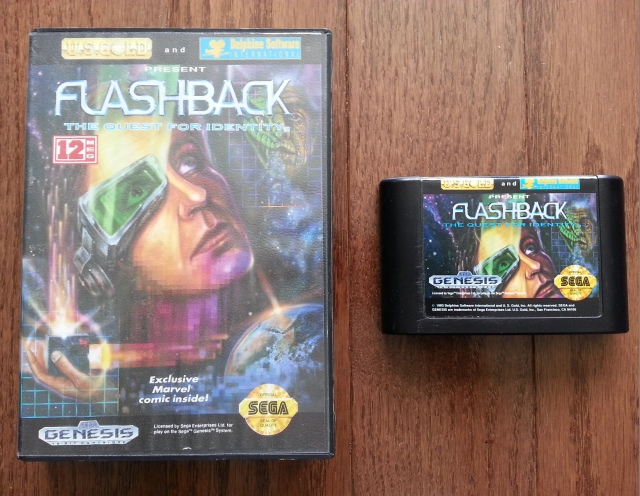 After seeing my giant pile building up, I was a little worried about the bottom line for all these wonderful games.  After some haggling, I ended up paying $400 for everything.  If your jaw has hit the floor, mine is down there with yours too.  Though I didn’t get anywhere near a screamin’ deal for everything here, I did get below what I’d normally pay at a swap or online, and I had been squirreling away money all winter long for an occasion such as this.  The store itself is also a local business that has been a part of the city for at least 30 years, so it feels better supporting them than it does slimy hock/pawn shop dealers trying to flip games so fast it makes your head spin.  There are definitely some great games here, and I’m looking forward to taking some of them for a spin in the future.

Here’s a nice family photo of all the games together.  You can also see the Chrono Trigger custom case if you were wondering what it was all about. 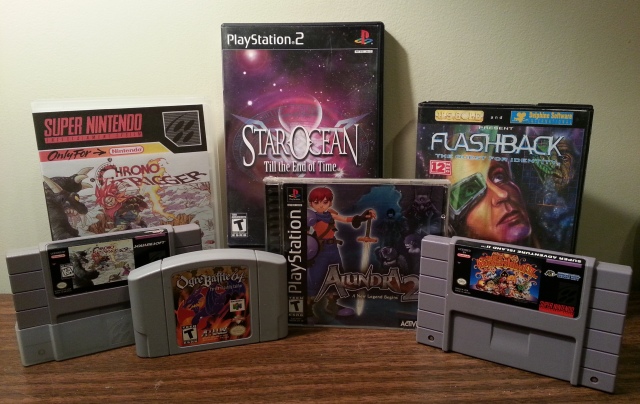 In other excellent news, we have finally ordered a piece of adult furniture for our Nerd Room to replace the awful Walmart shelf that has been housing our games for the past year or so.  We have a true hardwood shelf on its way which will be much more long-lasting and aesthetically pleasing.  Our current shelf is warped and bowed and comes apart in two pieces if you lift from the top (I assure you it’s not supposed to!) so it will be going on a permanent vacation to the sitting room with all my books that currently take up shelf space in the Nerd Room.  Gaaaaaames.

I also wanted to thank The Shameful Narcissist and AmbiGaming for the wonderful blog award nominations.  I haven’t forgotten.  I’m just horribly bad at keeping up with writing with work in full swing and other ongoing projects.  I promise to get a post out soonish!

I hope you are all having a wonderful weekend.  I have more things to post about and hope to get writing about them all in the next week or so!