Recently, it’s like the clouds have opened up and started pouring out games and accessories for the Sega Genesis.  I can’t complain since I grew up with one and had the same few games for most of my childhood.  We rented a few games pretty regularly like World of Illusion and Toejam and Earl: Panic on Funkotron, but my staples were Sonic 2, Bubsy, Bonkers, and a few others.

The first bunch of stuff I stumbled upon was from a classifieds ad.  Someone was selling a bunch of loose Genesis games as well as two blue light guns for the system.  The light guns are becoming a rarer and rarer commodity to find at a good price, especially the player 2 gun, which is pink.  Normally, the pink gun connects via a link cable to the blue one, but if you conveniently have two blue guns, you can modify the second to act like the elusive pink player 2 gun.  I knew this would be something my boyfriend would be interested in.  The guy selling wanted $50 for everything including the two guns, which was a steal.  I wanted to surprise my better half, so I met up with the guy alone.  He was only mildly shady, but the transaction went well.  The games smelled a bit like cigarettes and mustiness, but a quick wipe with a soapy cloth got rid of that.

Apart from the light guns being a high point of this lot of stuff, I was also excited for Road Rash and Road Rash II.  I’ve got a soft spot for Super Hang On, and these games are a fun extension of that kind of gameplay.  In Super Hang On when other bikers run into you, you have no recourse.  On the contrary in Road Rash, you can exact your revenge on those that would see you defeated with brute force!  Given that we picked up the light guns, Lethal Enforcers was also a great buy.  I’m not much for gun games, but I might give that one a shot sometime (pun totally intended.)  I don’t know much about Urban Strike except that if it’s anything like Desert or Jungle Strike, it’s hard as hell.

My boyfriend took the initiative to try to modify one of the blue guns to make it function is a player 2 gun.  He followed a guide provided by Mark Wylie, and it worked like a charm.  It involved removing the plug that would normally go into the controller slot and replacing it with a registered jack (RJ)45 – think the connector on the end of a telephone cable but with 6 wires inside instead of 4. 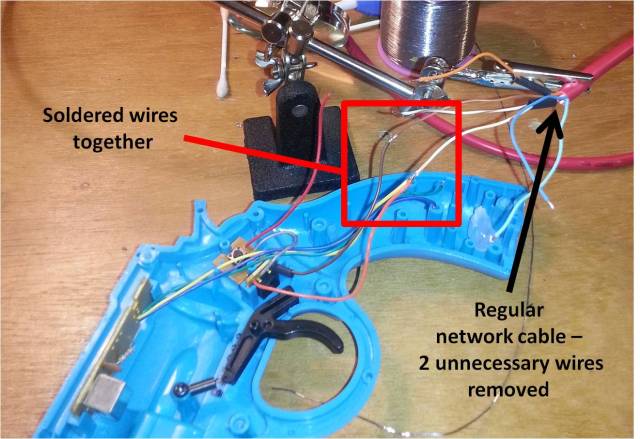 Below is a photo of the end product.  The red wire coming from the gun on the right is the one that was added on and now plugs into the base of the gun handle grip on the player 1 gun on the left.   Two-player capability is a must for proper enjoyment of some light gun games on the Genesis.  I’m so happy this worked out!

We also had the opportunity to visit a weekend flea market recently.  Among many antiques and loads of old books and DVDs in one vendor’s booth, there were a few Sega games available for extremely reasonable prices.  First, we found a beat up copy of NBA Jam in its box as well as a pristine, complete copy of Golden Axe II.  The Golden Axe II cartridge looks like it has never even been played.  There’s not a single scuff or scratch to the label.  We also scooped up a loose copy of Sonic 3D blast was also there, but we left behind a copy of Jurassic Park, a game I have never enjoyed playing – there’s a small story here, but I’ll spare you the details for the time being.  My boyfriend and I both have childhood copies of the game, so it didn’t make sense to hoard that one too. 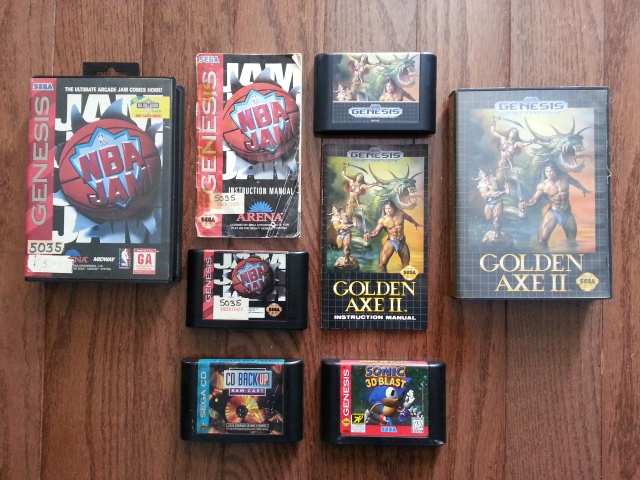 The most exciting thing we saw in this particular lot was a RAM cart for the Sega CD.  In recent months we had purchased one from a local hock shop for $30 after unsuccessfully trying to get the price down.  Our negotiating chip was that it had been sitting in their cabinet since we started going to that store (literally years).  Of course at the time, the hock shop vendor insisted on double-checking the price online and scoffed at our offer of around $20.  The price on eBay had surged up to $50-$60, and he bluntly told us to take it at the price it was or he’d jack up the price if we left it behind.  Feeling like we had our backs to the wall, we had bought the RAM cart and felt lucky to have found one.  Well let me tell you – the one we found at the flea market was an absolute steal for the low, low price of $5!  We picked it up hoping that it worked, and sure enough, it does!  We checked out the saved games on the cartridge, and there were some saves from some pretty expensive games on there: Lunar 2 and Popful Mail.  Hopefully we didn’t miss those at some point.  We only get out to that flea market every few months, so I’m sure we’ve missed a few things over the winter. We’ll be sure to check back more often now that the weather is warming up!  Well sort of.  We haven’t gotten a dumping of snow in about a week or so.

In other fantastic news, the first swap of the year is coming up in a few weeks.  I’ve been compiling my list of things I want to track down there.  If you could all start sending your good vibes my way, I’d appreciate it!  Here’s a short list of some of the things I’d like to find:

It’s an ambitious list, but who knows what I’ll find?

Hope you’re all well!  Thanks for reading!