Sometimes I luck out and happen to be the first person to reply to an ad.  I’m surprised this doesn’t happen for me more often since I probably check the video games section of the local classifieds site at least 203984 times each day, but I digress.

One person with multiple ads online had a wide selection of consoles, accessories and games for several different consoles available, including the NES, the Sega Master System, and the Sega Genesis.  The games themselves were a little bit of a mystery.  The photos were blurry and some of the games were covered up entirely.  I counted about 40 games or so in total from all three ads, as well as about five consoles with many controllers and accessories.  The kicker for me was that he hadn’t listed a price on each ad but was instead taking offers.  I’ve often lowballed people on game lots because as far as I’m concerned, if people want premium price for each item, they should be listing separately.  I assume a game lot means a combined, discounted rate of sorts.

I offered $300 and wasn’t expecting much back from the seller, but the guy got back to me later that day saying I could have it if I wanted it.  Of course, I was absolutely thrilled by this news.  We made plans to meet up the next day, and he delivered four bags and two boxes full of stuff to the house.  This was definitely one of the bigger game lots we’d bought in a while, and I immediately dove into the spoils to see what was in there.

Most of the stuff was in absolutely excellent shape, but some of it was not.  There were some game cases, mainly the Sega Master System stuff, that were clearly water damaged.  The case art pages for those games were covered in mould, and I was worried that the consoles or games had suffered a similar fate and might not be functional.  It was extremely disappointing since this was not disclosed in the ad (he didn’t even say “as is” or even allude to there being any water damage), nor were the pictures very transparent about the condition of those particular games.  I might have offered less had I known that, so I feel a little ripped off.  We took the case art pages out and gave them as good of a wipe down as we could without damaging them further and plan to iron them to get some of the wrinkles out.  They aren’t perfect by any means.  They’re actually super unsightly, so we might consider getting some prints of the original images and keeping the damaged authentic ones hidden in there as well.  We haven’t quite decided yet.  Here are some photos of the wrinkly, mouldy pages.

Along with the games, we also got two Master System consoles, their connectors and four controllers.  When we opened up the consoles to clean them up, it was apparent that one of them had seen quite a bit of water.  There was an accumulation of rust on the upper heat shield, but thankfully the electronics board was protected and seemingly unaffected.  Below, you can see the rusty heat shield on the left, and the non-damaged one on the right side.

Despite their previously watery storage conditions, the only game that gave us a great deal of trouble to start up was Ghost House, a Sega Card Game which seemingly took the brunt of the water damage out of the lot.  We had never tried out the Card Game slots on any of our Master System consoles, so when things weren’t firing up right away, we wondered if it was the game or the console slot that might not be functioning properly.  After a good contact cleaning with both chemical products and an eraser (the trusty last-ditch effort), it finally worked!  The contacts for all the other games were also quite dirty, so we gave them all a thorough scrubbing as well.  Here, you can see all the games we got.

The rest of the stuff we got was in decently good shape, though things were still smelly, musty and dusty like most other things we drag into our home from these classifieds dealings.  The Sega Genesis games were mainly ones we didn’t already have, save the two Sonic the Hedgehog Games which are going to a friend of mine.  One game case was completely empty (Bubble and Squeak), which was a bit of a disappointment.  I contacted the guy selling to ask if the game was lying around somewhere at his home, but I’ve yet to hear back from him and doubt that I will at this point.  The only game that came with its manual here was the Spiderman game, and the condition of each of the cartridges was extremely variable.  Some of them had what appeared to be rental store stickers plastered across the labels while some labels were torn or damaged.  I gambled and lost a bit here, I suppose. 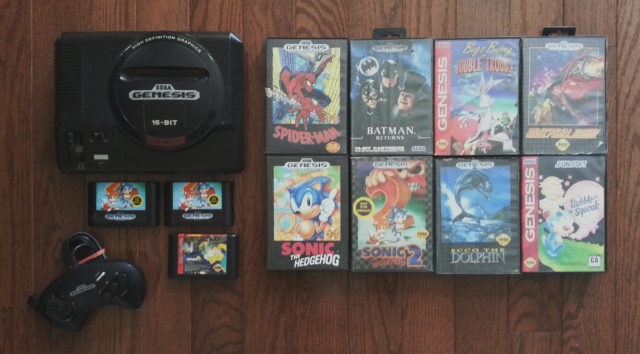 An exciting thing about the Genesis stuff was the console revision type we received.  It was one of the first model 1 Genesis consoles produced since it has the words “High Definition Graphics” printed on it.  This console has an extra port on the back that other model 1s did not that was supposed to  be compatible with the failed VictorMaxx Stuntmaster, and it is also known for having a much higher audio and video quality compared to later revisions of the Genesis.  I personally grew up with a model 2, and there’s a markedly fuller sound on the model 1 consoles.

The final set of stuff we got was all NES-related.  We got two consoles, four controllers, a light gun, and 28 games.  It’s hard to see from the photo below, but one of the consoles and two of the controllers are extremely yellowed. 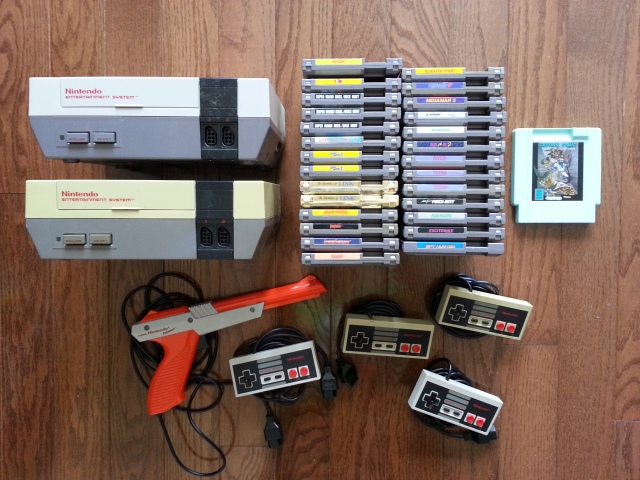 Because we only knew a few of the games we were getting based on what little we could see in the ad photos, a lot of the games we got were a surprise.  There were some in there that we already own, but also some we didn’t like Mike Tyson’s Punch Out, Excitebike, Rad Racer, and many  others.  I’m always happy to find extra copies of Super Mario Bros. games, and now I finally have a second copy of Faxanadu in my possession!  That was a good find as well. I was hoping to randomly find Crystalis or Willow, but no luck.  At least I lucked out with Wizards and Warriors II and some other excellent games!

Unlike much of the other stuff we received in this lot, the NES stuff, especially the cartridges, were in excellent condition.  There were a few doubles (and triples!) in the pile, so I removed those and took the photo below.  Some of the extras will go forward as trade fodder for some new games at the coming game swap, and others I’ll keep to pass along to others. 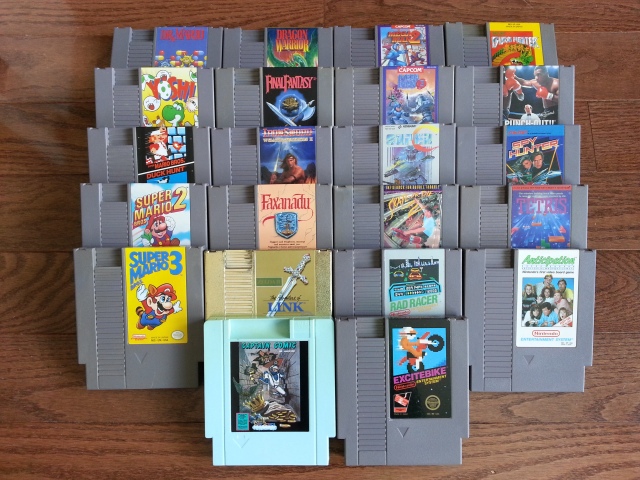 Overall, despite some problems with the condition of individual games, at least everything works!  At the end of the day, though I greatly prefer to own games that are well-cared for, being able to experience the games is my ultimate goal.  For $300, we got a ton of stuff and will be able to make many more gaming memories together and with friends, both online and in the flesh.  Truly, that’s what matters!

I hope your Friday is turning out to be wonderful.  Thanks for reading!