The first game swap of the year has come and gone, and there is certainly nothing quite like the feeling of leaving a venue with a bag full of awesome games you’ve been looking for.  Below is an interpretation of exactly how I felt, except I was smiling more than Link is.  His facial expression of awe and wonder is definitely how I was feeling on the inside, though.

Without further ado, let’s get on with the fun, shall we?

The thing I find the most daunting about big swap events is that there’s just so much to take in all at once.  There are tables and tables of games, and if you don’t head down the right aisle first, you might not get what you’re looking for if someone else beats you to it.  It’s always a crapshoot, but I’ve also learned to take some time and look around at every table before buying (see this post and all the regret I had when I panicked and rushed into buying a crappy label Earthbound.)  Since we’re often travelling to these events from out of town, one thing we will often do is get early access tickets that permit us into the venue 30 minutes before the regular crowd barges in.  This at least gives us a slight advantage in getting some of the rarer things that otherwise might get scooped up.

Let’s get the elephant out of the room here.  One game I bought on an impulse was Alex Kidd in the Enchanted Castle, and I have serious regrets – this is why the Wizrobes are carrying it away above.  I stupidly always get Alex Kidd and Wonder Boy confused in my head even though they’re very different game styles.  In the recent past, I had watched several long video reviews on both franchises to try to piece together which other games I wanted to pick up.  I remember hearing one reviewer go on about a dud among the gems, but for the life of me I couldn’t remember whether it was from Alex Kidd or Wonder Boy, and even worse, I couldn’t remember which game title was filled with terribleness.  The person selling said Alex Kidd in the Enchanted Castle was a good game when I asked, and me being a foolish, naive person took his word.  I inherited a real awful game here.  I playtested it for about 5 minutes and died at least 10 times.  I won’t go on much more about it, but I want my $25 back.  At least the game was in good condition and came with is manual.  It was probably so nice because nobody played it after getting skewered a billion times in the first five seconds of the game.

The game I set out searching for right away was Phantasy Star IV on the Sega Genesis.  At the last few swaps, I found the second and third in the series and found the first game online in recent months.  Phantasy Star IV was the last one on my list, and it wasn’t one I was willing to buy online for close to $100.  I only found two copies in the entire place that were boxed.  One boxed copy ($130) came with the manual, although it was really tattered and not in good shape at all.  The other boxed copy ($80) was without its manual, but the game and the box were in astoundingly good shape (in the photo below, the label looks torn at the top but it’s just the reflection of the light coming in from my window.)  Even though I really wanted to find a complete version of this one, I couldn’t justify an extra $50 for a pile of wrinkly, bent and ripped pages that used to resemble a manual, so I ended up going with the $80 copy and getting a final price of $70.  I was going to do a trade with the seller straight out for my loose copy of Secret of Mana, but he insultingly only wanted to give me $40 trade value for the game.  I was honestly offended by this guy’s offer.  He literally had thousands of games at the swap, most complete and in gorgeous condition.  He had even arrived at the event in a Cadillac, and he was lowballing me!  I guess his lowballing skills are how he got so rich to begin with.  I held onto my trades and paid cash for this one.

The other Genesis game I was looking for was Shining Force II.  This was another game I wanted to find complete with its manual, but there was not a single one to be found in the entire venue.  I found one copy of the game that looked as if its label had been water damaged, and the guy wouldn’t go lower than $30.  It honestly looked like a piece of garbage, so I passed.  I found another loose copy of the cartridge in much better shape for only $35, so I went with that one instead.  I hope I won’t have too much trouble with the game without a manual, but if all worse comes to worse, I can always look it up online.

Since I’m a huge fan of maps and booklets for video games, I always get excited when I find some for a good price.  One that I’ve always wanted to have was the manual for Final Fantasy for NES.  It’s an 80 page instruction manual/walkthrough.  I found a copy that is a little beat up, but it has all the pages and only needs a little bit of repair to fix the ripping along the spine.  In addition to this, I tracked down a copy of the Dragon Warrior Adventure Guide – a cardboard insert that comes with information about the various ranks achieved while levelling up, as well as some information about the different spells in the game.  I luckily also ran into a map for Dragon Warrior that doubles as a bestiary.  It was fully intact, but definitely starting to wear out at the crease lines.  I honestly feel like I should laminate all my maps before they rip to shreds.  They’d definitely make some good wall art. 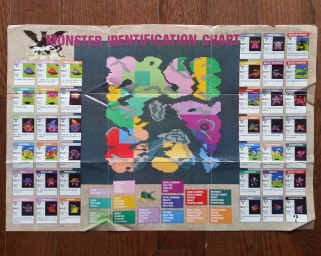 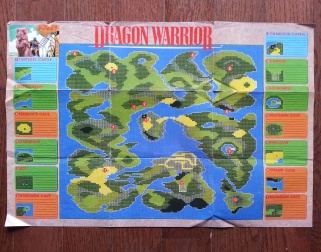 Staying in the vein of NES stuff, I also chanced upon some wonderful RPGs for the system: Crystalis and Willow.  Crystalis is a game I became pretty obsessed with about two years ago and was one of the games that really pushed my collecting into overdrive.  Discovering that game was one of the first times I realized that there were many good RPGs out there that I hadn’t even heard of and wanted to find and play (Golden Axe Warrior and Phantasy Star were others that soon made their way onto this list.)  At the swap, I had found a copy of Crystalis for $30 and gotten the woman selling down to $25.  This wasn’t a terrible deal given the excellent condition of the game.  I hadn’t seen the game for cheaper than $30 in over a year.

Willow was a definite steal.  I got the game with its box and manual for $20!  At many other tables, the game was going for $20 just for the cartridge, so I really feel like I lucked out there.  Oddly enough, it was being sold by a seller who had a ton of games complete that were at least $10 over the going rate on eBay, so I was surprised to have found a deal there.  Though the manual has some passwords scrawled across its front page, the box and cartridge look brand new.  I don’t think I’ll ever get past the vacant look in Willow’s eyes though…

Since I still had a bunch of trades burning a hole in my bag, I was looking for a more expensive game to barter for.  I ended up back at the table with the water damaged Shining Force II cartridge and asked the seller if he was taking any trades.  I pulled out what I had – loose copies of Secret of Mana and Zombies Ate my Neighbours (SNES), a complete copy of Wonder Boy in Monster Land (SMS), and a complete copy of World of Illusion (Genesis).  He said he was very interested.  I saw that he had Suikoden and Suikoden II, which are fairly expensive PS1 games (especially the second!)  After looking at their condition and determining the trade value to be at around $160, I ended up getting both games for the trades plus $60, which wasn’t too bad.  Suikoden came without its manual, while Suikoden II came complete.  I wish both had been complete, but the trade seemed fair enough and the CDs were in very good shape.  The case for Suikoden II is cracked, but that’s an easy fix.  I have a few extra jewel cases lying around. 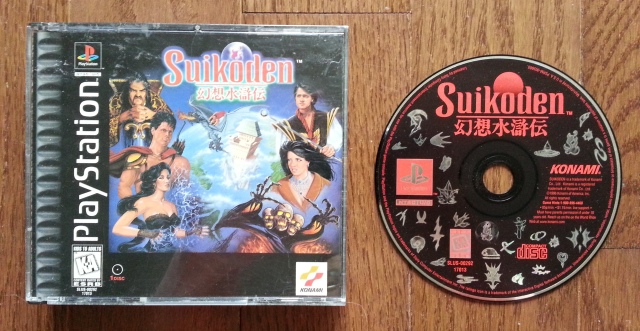 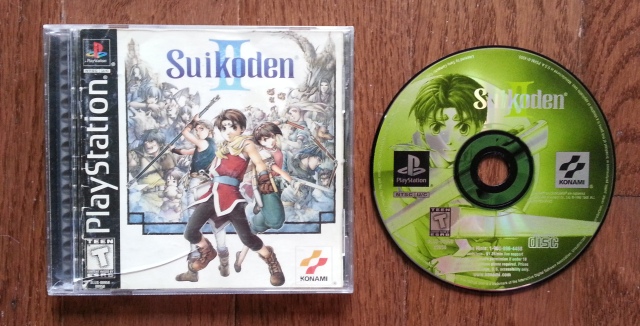 I’ve heard Suikoden II foisted up unto many a-pedestal as one of the best RPGs of all time, so I was almost tempted to forego the first game for the sake of cost.  The vendor I bought these from told me that I should play the first one before the second because apparently you can carry things from the first over to the second game.

The last things we got from this swap were for my better half, and they’re the only things he wanted: another professional monitor, and a Neo Geo game.  Since getting his Neo Geo up and running, my boyfriend has been itching for a copy of Baseball Stars 2 among the others we acquired recently (post incoming!).  The game is a hilarious take on the usual baseball formula, employing lots of burliness and machoness in its fast-paced gameplay.  The professional monitor we picked up was a 14-inch JVC TM-R14U that has an absolutely beautiful display.  I wish there was some way to capture it to convey its loveliness, but alas. 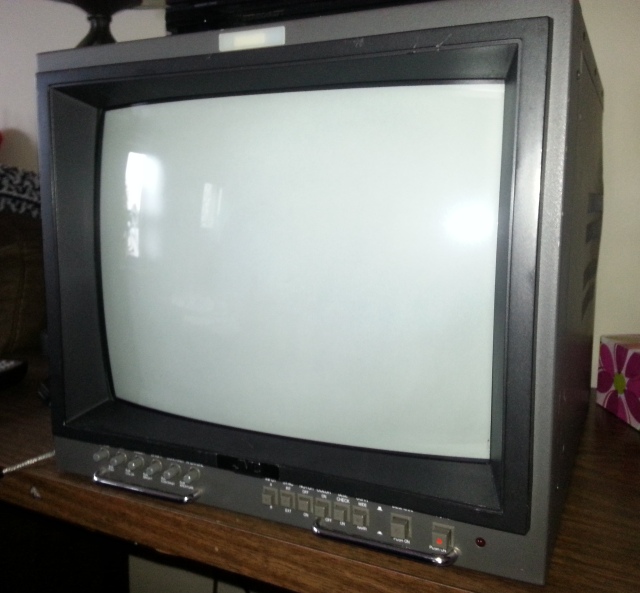 All in all, I’d say we had an extremely successful swap!  Though my list is ever-growing, I certainly got to knock of a lot of things off of it.  I’m really happy to have gotten so many games I’ve been looking around for in one place at one time.  Now to just find the time to play them all…

Thanks so much for reading!