This is the sixth post in a series called “Hungry Goriya Used Acquire” that serves to highlight the contents of a large game collection I procured from an old high school friend of mine, Joe.  Read here for the backstory.

Ah yes, the original Xbox.  It was part of a console generation that I missed in its entirety in my youth and am just now finding out more about.  My boyfriend and I have recently stumbled upon a few cheap Xboxes out in the wild and have been trying our luck at modifying them into multi-console emulators with great success.  These have made great gifts for a few friends of ours, but before acquiring Joe’s collection, we probably only had about 3 games for the system.

Way back at my blog’s first entry when we acquired the collection of A.S. long, long ago now, one of the things he withheld giving us was his crystal Xbox.  He had gone on about how much he loved playing Jade Empire and couldn’t bear to part with the machine, and at that point I didn’t care one way or another.  In the past year we’ve seen the consoles going up and up in price and though we’ve never actively sought one out, we’ve always said that if a good deal came along that we’d jump on it.  Well, Joe’s collection delivered a chance to us, and conveniently the console came complete in box with a matching controller. 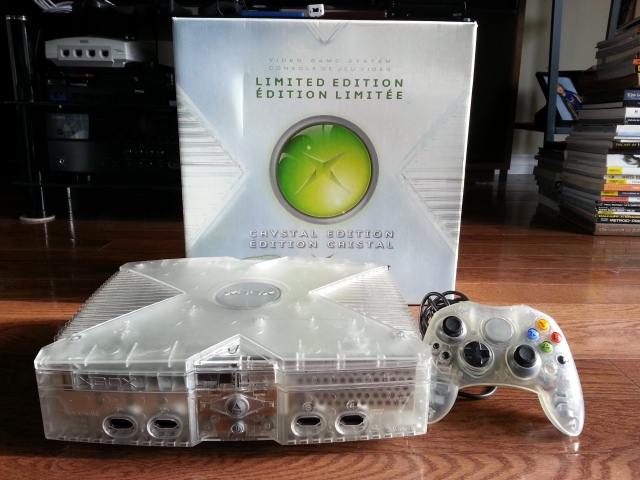 The console was in its original styrofoam packing and was still in a bag, so it’s entirely likely that the thing has never been turned on.  We are debating what we’d like to do with it since it’d be nice to modify it, but there’s also some allure to keeping it in its native state.

Along with this beautiful console, we got a bunch of games as to be expected.  The first bunch of games here are all various versions of Halo and Halo 2 with some extras.  Though at first glance it might seem as if there’s two copies of Halo and the Halo 2 Collector’s Editions, but there’s a regular copy of both along with Not For Resale/Display Only copies.  I’m not sure if there’s a difference in gauged worth for these different releases, but it’d be interesting to look into them to see what they’re all about.

There were lots of games that we got for the Xbox I personally have very little interest in playing, and many of the Tom Clancy games fall into that category.  I have many epic RPG quests to embark on, so I’ll leave these to my better half who might enjoy them a little more.

Along with these came many more games, and some of these I’m a bit more familiar with and am interested in.  I’ve heard really great things about Psychonauts, Beyond Good & Evil, as well as the Star Wars games.  I’m still looking into a lot of the others here since this is a console I normally don’t collect for, but it’s looking to be quite a well-rounded bunch of games.  Every single game here is complete with its manual and sometimes has its other inserts as well.

Every time I see Max Payne: The Fall of Max Payne, I keep thinking of the physical interpretation of someone falling and crack up.

Last but not least, there were a handful of RPG-esque games for the console in the bunch.  I was hoping to run into both Panzer Dragoon Orta and Fable, but Otogi and Otogi 2 came as a total surprise to me.  I hadn’t heard of the series before now, but it looks pretty cool!  I’m definitely looking forward to some action RPG action!

And that about wraps up what we got for the Xbox from Joe’s collection.  If I don’t sound super excited about this portion of the buy, I apologize.  I have truly never spent much time looking into the Xbox or its games, so this is all really new to me.  If anyone has insight into some of these games and can tell me of their goodness/badness, I’d definitely appreciate some information, as usual.