This is the eleventh post in a series called “Hungry Goriya Used Acquire” that serves to highlight the contents of a large game collection I procured from an old high school friend of mine, Joe.  Read here for the backstory.

Many folks know that I’m a huge Sega fan, especially now that I’ve jumped down the rabbit hole of collecting great games for the Sega Master System.  My love for Sega is not new since I started out with a Sega Genesis in my youth and got my very first Dreamcast console just last year along with some wonderful games, including Seaman.  In Joe’s collection there was very little to be had in terms of all of the aforementioned consoles, so I’ve decided to lump them both together into one post.

Unlike most consoles we received, the Dreamcasts were some of the few that did not come boxed or with any inserts or handouts.  On the bright side, we did receive two consoles in working order, and each with their own controller but with only one VMU to share between them.  Both games we received here we already had, but I’m pumped to have a second copy of Grandia II to either trade for something I don’t already have, or potentially bundle with a console if we decide to sell one.  I also love seeing the old price sticker for $19.99 on there.  Have times changed, or what?

Along with the Dreamcast greatness, I was thrilled to find three model 1 Sega Genesis consoles amidst all the items of the game collection.  Two of them were loose with some controllers, but one came boxed with its instruction manual and Sonic the Hedgehog 2.  The box was in pretty great shape for the most part with some wear and tear from age/storage.  Despite some aesthetic issues, it still has really great integrity!  In total we got four controllers, one of which was a 6-button.  This was a pleasant surprise.  Not only are they harder to come by, but the 3-button counterpart tends to feel mushier and mushier as years go by.  The 6-button controllers tend to have a little more snap. 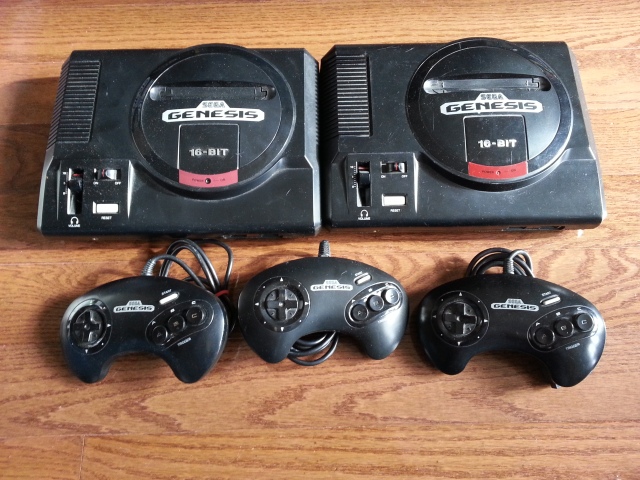 Along with the Sonic 2 pictured above, there were a handful of other games games in mixed condition (and if you’re wondering, that’s a different Sonic 2 below.)  Most of the issues were only label-deep (marker or stickers over the game’s labels), but all games are working which is what is most important.  I wish that all the games came with their manuals, but only three games had them.  Altered Beast had a manual but was missing its box.  It was truly a mishmash of incompleteness, but at least Altered Beast and Toejam and Earl were new to us.  The other games are ones we had already.  To date, I probably have about as many copies of Sonic 2 as I do of Devil May Cry (to those that have not been following these posts, it’s a lot of copies.)

So not much new for us here, but there are definitely some good things to come our way in this chunk of the collection.  I’m mostly excited to play Toejam and Earl again.  I absolutely love the sequel, but I remember accidentally renting the first game instead of the second and hating it because it wasn’t Panic on Funkotron.  I really need to give it a second chance!

In other news, I went to a game swap today and made out like a bandit by making some good trades.  I’m hoping to get a post together about that when I have a chance to get some photos taken of everything, so stay tuned for that!

I hope you all have a lovely week.  As always, thank you very much for reading!