I found myself at another swap a few weekends ago, and what a sight it was to behold!  After not getting out to any since May-ish, it was a welcome change of pace from the slow-as-molasses-going-uphill-in-January pace of game hunting locally.  Some scheduling conflicts have made it quite difficult to get out and about to all the events that I would’ve liked to this summer, but what can you do?

Instead of splurging on early access as we usually do, we chose to be super casual and show up about 30 minutes after the show had started to avoid the lines, and have a more relaxed travel morning.  I can’t express how much nicer the trip was.  Because we sometimes have to travel quite far for these swap events, it takes a bit of the stress off when we’re not held to a strict deadline for early entry.  I’m sure we will do this again in the future, without question.

Between a few great swaps and from buying up my friend’s video game collection, I’ve checked a lot of big ticket items off my “to-get” list.  Don’t get me wrong – this particular event yielded some fun stuff, but it was the first time ever that I felt a little… bored?  I walked by bins and bins of games for all the consoles I collect for and didn’t find too much that I still needed to find.  It makes me wonder how much more I truly want to collect, and what the hell I’ll do with myself when that final day finally does come.  Hopefully that’s not for a little while.  I have a blog to write after all!

I only picked up a handful of games this time around, and the first one I’ll show here is Zillion for the Sega Master System.  I’ve really rounded out a lot of what I want to own and play for that particular system, but Zillion caught my attention when it was brought to my attention several times by people asking if it was part of my SMS RPG Quest I’ve been working through at a snail’s pace.  I almost bought the game at a game store a few months ago, but they wanted $35, and the salespeople pissed me off after they tried to persuade me to buy Sailor Moon reproduction cartridges.  I was insulted on several levels, but I digress.  Zillion was in excellent shape, came complete, and I snagged it for $20.  What… uh… wonderful boxart this game has.  It looks like a fancy microwave.

The last few games I picked up were for the NES: Battletoads, Teenage Mutant Ninja Turtles III: The Manhattan Project, and Legacy of the Wizard.  As a huge fan of Faxanadu, Legacy of the Wizard is another game in the Dragon Slayer series I’ll likely enjoy despite its apparent high difficulty level and obscureness at times.  The TMNT game was more for my other half than myself, but it completes our collection of those games for the NES.  I’ve never even seen gameplay of Manhattan Project, but I’ve heard it likened to the second game which I’m horrible at.  Beat ’em ups are not at all my forte.  Finding Battletoads felt like a personal victory for me.  My cousin had given me a complete in box copy of the game when I was younger and then later decided he wanted it back.  I foolishly gave it back to him without a fight and had been missing it ever since until now.  I’ve been looking for this game for at least five years and have had no luck finding a deal.  Vendors have tried to sell me loose copies at around $60 a few years ago, but for some reason the price has come down quite a bit in the last year.  I managed to get my copy of Battletoads for $20, Legacy of the Wizard for $10, and Manhattan Project for $30.  Not too shabby!

As a lover of art and manuals, I couldn’t help but pick a few of them up for myself.  I actually forgot to include a few in this photo, and those would be for Golden Sun (GBA) and another for Warlocked (GBC).   I was really happy to find a copy of the Oracle of Ages booklet.  I have an absolutely beautiful copy of Oracle of Seasons complete in box, and I only had the cartridge for Ages until getting the manual here.  The manual for Kirby’s Adventure was a great purchase too since it’s the only part I was missing for my copy of the game – I’ve got a box and cartridge awaiting the final piece!  I don’t own Castlevania II Belmont’s Revenge for Game Boy, but I thought it would be a good idea to pick up the manual.  It’s about five pages long in total, but if I ever find the (fairly expensive!) game, it’ll be nice to have the book to go along with it.

In a pile of manuals, I started sifting through some Atari booklets.  Among them I was really excited to find two of the Swordquest comic books that came with the Swordquest games back when they had their infamous game contest.  They were in absolutely pristine condition, and I’m really looking forward to reading them sometime soon.  I regret not getting some other Atari comics that were there, but maybe there’ll be some at the next one. 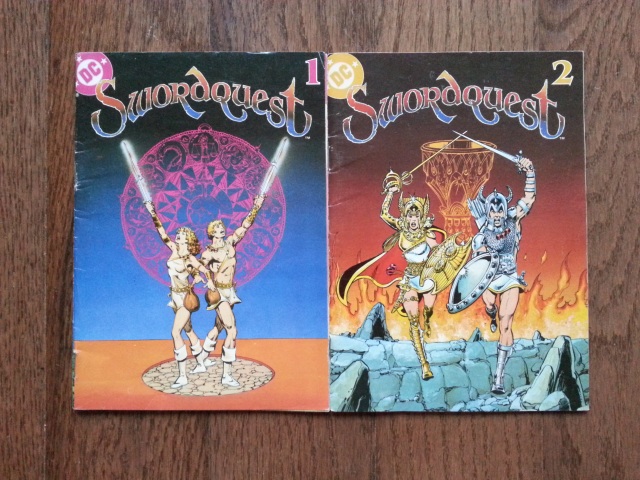 So yes!  Nothing at all groundbreaking here, but I am certainly happy with the bunch of things I brought home.  As usual, here’s a group photo (minus the two manuals I mentioned above and with my boyfriend’s copy of Samurai Shodown for Neo Geo MVS I forgot to take an individual photo of.) 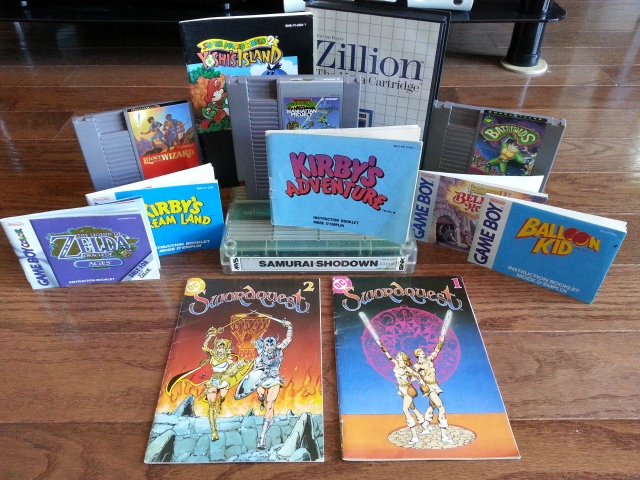 I’ve been pouring over eBay for a few games I couldn’t find at the swap, especially Game Boy RPGs.  I’m a bit obsessed with those and have added a few to my shelves over the last month or so.  I’ll have another post for that once the last of them show up in the mail!

Hope you’re all off to an excellent start to the week.  Thanks for reading!