Posted on September 7, 2017 by hungrygoriya

The Game Boy was my childhood companion console alongside the NES and Sega Genesis, though I only had a handful of games for the system.  I had Super Mario Land, Super Mario Land 2, Tetris, and my most favourite game of all: Link’s Awakening.  I spent many an hour tethered to various power outlets in my parents’ house trying to wake the Windfish (I didn’t actually succeed until I was well into my 20s), but nothing else on the console ever felt like a must-have in those days.  I’ve picked up the occasional Game Boy game here and there when I’ve come across them for a good price in my adult life, but it wasn’t until I got a bunch of games from my friend back in April that I got super interested in anything outside of the mainstream, popular games for the system (Pokemon, for example.)  What began what can only be described as an obsession with Game Boy games was Bomberman Tournament.  At first glance, I wrote it off as another Bomberman installment, but much to my surprise, it is an RPG-style game that actually looks adorable and fun to get into.  Wondering what else I had misjudged or missed altogether, I took a long, long tumble down the rabbit hole that is the Game Boy library, and I’ve been incredibly pleased with what I’ve discovered.  There are so many notable games that I hadn’t even heard of.  I’ve been on a bit of a buying spree to find a lot of them, and I wanted to share them with you.  Here we go!

Because I’ve been buying up game lots online most of the time, I’ve been acquiring some random games along with the ones I’ve truly been after.  One pleasant surprise in the photo below is Wario Blast where you are essentially Wario fighting against Bomberman in bombing matches to the death!  The music is probably some of the catchiest I’ve heard on the system so far.  Despite being generally horrible at the moment, I hope to improve and play it through to the end one of these days.  Obviously it was nice to find extra copies of Super Mario Land and Link’s Awakening in the mix, but some of the other games are leaning far on the side of meh.  Toy Story 2 and Monster’s Inc. felt horrible while I was testing them, but the Construction Zone and Genie Barbie games looks like they have some potential.

Snoopy’s Magic Show was lumped in with this photo even though I found it locally.  It was at a hock shop for ages and I finally remembered to do some price comparing to see if the pricing was reasonable.  I got a no-tax deal on it and a bit of a discount because of its crappy label.  It’s a puzzle game that I can play all day long for its cuteness and pleasant distraction from everyday life.

Now for some RPGs!  I found a bunch of titles on a really old forum post for must-have Game Boy RPGs and started watching some gameplay videos of the chosen ones soon after.  Though some games on the list were a bit too expensive for my tastes, there were a bunch that I got for what I felt was a reasonable price.  Rolan’s Curse was the first one I found, and I ended up playing it for about two hours while testing it because I was intrigued by the gameplay and its cuteness.

With Link’s Awakening being one of my favourite games ever, For Whom the Frog Tolls (blue reproduction cartridge in the bottom row) was a no-brainer to pick up.  It’s a translated Japanese-exclusive action RPG made in the same engine as Link’s Awakening, but before Link’s Awakening was released!  In the same vein, James Bond 007 was a great recommendation to me from TheDeviot. It’s another game I ended up “testing” for an hour before putting it down to do other things, and its gameplay style is also reminiscent of Link’s Awakening. 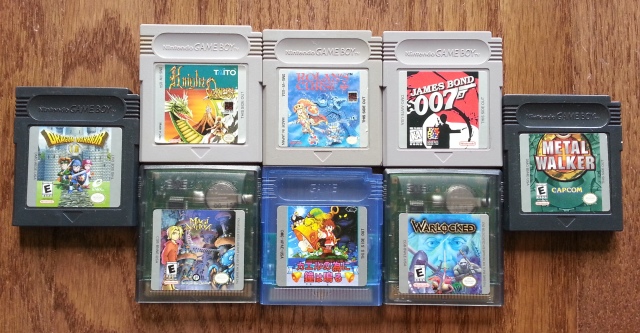 I had been looking for Dragon Warrior I&II for a very long while, and though I have the NES version of the first game, I’ve never been able to track down the second one for a reasonable price.  I have a beautiful complete in box copy of Dragon Warrior III for GBC, so now all I have left to find is Dragon Warrior IV.  Another game here I’m looking forward to a lot is Magi-Nation whose graphics remind me of Earthbound for some reason.  Warlocked is honestly really good too.  It’s a real-time strategy game and is my first kick at that particular genre.  I liked it so much that I streamed it recently for several hours and was not even remotely tired of it.  I’m hoping to do a full playthrough at some point.

The two games I’m probably the most excited about from this bunch are Metal Walker and Knight Quest.  Metal walker is Pokemon-esque where you have robot fighters that you pit against enemies in a battle arena.  It’s turn-based, but there are a few unique aspects that use the physics of the arena to change up the combat from a traditional menu-based turn-based RPG.  Knight Quest is one of the rarer games in the bunch and looks to be so, so lovely.  It’s a traditional turn-based RPG with cool battle sequences where you see animations of your hero attacking the enemies rather than just implied damage infliction with sound effects.  It looks like a great little game!

There were a few other games I wanted to find.  I got a copy of Legend of the River King 2 from my friend Joe and I wanted to find the first game as well.  It reminds me of Harvest Moon games, and that’s always a plus in my books.  It didn’t take me long to get a copy of that one pretty cheap, but did it ever take me a while to find Survival Kids!  I checked every single table at the last swap I went to and tried to win a few eBay auctions, but no luck.  I finally gave up and ordered a copy of the PAL version called Stranded Kids, and guess what?  Two days after I ordered Stranded Kids, Survival Kids showed up locally, and for $10!  I jumped on that, so now I have a copy of both versions of the game.  Woohoo!  I like the PAL cartridge art much better.  It reminds me of Secret of Mana for some reason. 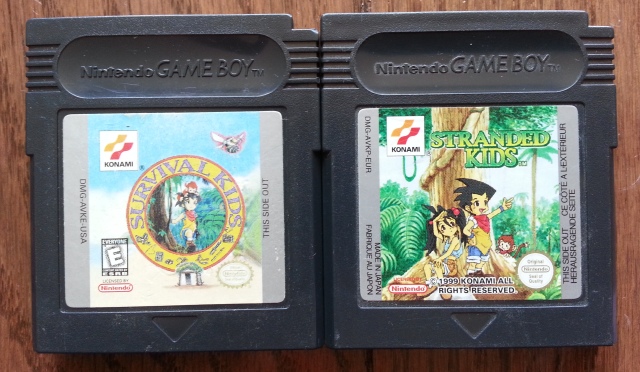 Along with the Survival Kids game, I also got my hands on a bunch of Game Boy Advance titles.  There’s nothing in particular in the bunch that calls to me, but according to the woman selling, the Spiderman game was particularly good.  Either way, I have a bunch more games to try out, none of which are doubles for me!

The Game Boy Advance SP in the photo below is one of the AGS-101 models with the back-lit screens.  These are rumoured to be significantly better in image quality than the AGS-001 version, which is front-lit. I haven’t done a side-by-side comparison myself, but at least I’ve got one to try out sometime.  Maybe on our next roadtrip, which might be a little sooner than I thought! 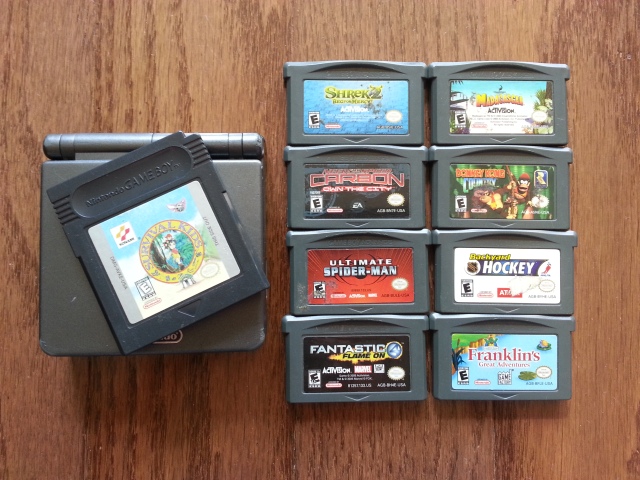 I’ve been on a handheld roll lately, so expect a few more posts with that theme to tumble out in the next little while.  Between things being a little slow on the collecting front and work becoming a whirlwind out of nowhere, I’ve been slow to post.  I’m still here, just idly waiting for more games to descend upon me!

Happy almost-weekend!  Thanks for reading!