There once was a girl who drove a lot to find games.

Posted on November 3, 2017 by hungrygoriya

In my last post, I mentioned that I had made it to a couple of swaps in the last little while, and boy oh boy were they a lot of fun!  Despite some less than pleasant hotel stays (why are polyester sheets even allowed to be a thing that’s used, ever?), the last two swaps of the season were bountiful, and I’m excited to share what I found!

The first event I went to was back in September, and I know a vendor personally that regularly attends.  He told me that someone had recently sold him an absolutely enormous PS1 collection with near-perfect condition games, and I was intensely thrilled at the possibility of finally rounding out my Playstation RPGs.  Unfortunately he also mentioned that he couldn’t sell to me early or even put anything aside since everything was boxed up to  bring to the event.  He urged me to get there early so I could have first pick, but first pick at these things usually means picking through leftovers after all the vendors have had their way with the best of the best before the show opens.

We made it in only 10 minutes after the event opened and I made a bee-line for that particular table.  It was absolutely swarming with people and there was no room to squeeze in, so I had taken a look elsewhere to see what was lying around.  If you’ve been following here for even a little while you’ll probably know that I’ve become mildly obsessed with Game Boy games.  And Natsume games.  And also Hamtaro.  The games I found here catered to many of those desires!

The Hamtaro game was something I completely took a gamble on.  I loved the show growing up but was a little older when it came out.  I didn’t catch it nearly enough, but the idea of adorable hamsters having their own society makes me all warm and fuzzy on the inside just like the best hamsters are on the outside.  I digress.  Hamtaro Ham-Hams Unite! looks to be a strange puzzle game where you get to learn hamster slang and help people solve their problems.  Not only is this a really interesting premise, but the game is freaking adorable!  I’m so excited to try it out!  Spanky’s Quest was a game I hadn’t heard of, but I saw the Natsume logo on there and decided to dive in.  If it was at least as good as Harvest Moon, I was golden, right?  Well, it’s not quite HM, but it’s definitely something I think I will find a fun challenge.  It’s hard to explain, but I strongly think I’ll prefer this release over the version released for the SNES.  Lastly, Castlevania Adventure, though widely booed and hissed at by many, is something I’d like to try.  I’m slowly amassing many games from the series but have yet to actually complete any of them. 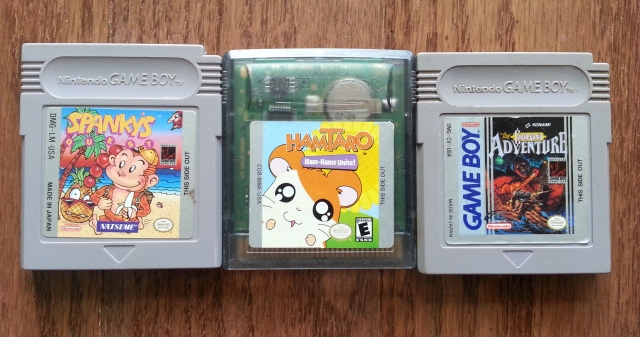 My friend’s vendor table was still jam-packed with folks that were shoulder to shoulder, so I kept perusing the event floor looking for the next big discovery.  I did have a few trades with me and I wasn’t afraid to use them when I finally ran across a decently priced copy of Breath of Fire II for SNES.  This is one of the last SNES RPGs I needed to find, and I was okay buying it for $50 with a bit of a ripped label.  Who needs that guy’s beefy arm and part of the Super Nintendo logo thing anyway?  I’ve been looking for this game forever.  There has been a local copy at a hock shop for $69.99 + tax with a glued on printed paper label.  Yep.  You’re reading that right: a shitty, awful fake-label game that might not have even been authenticated for probably close to $85 with taxes in.  I’d much rather have taken my chances on this mildly torn label than give my money to those jerks.  Even if it’s badly translated, I look forward to endeavouring on this adventure sometime! 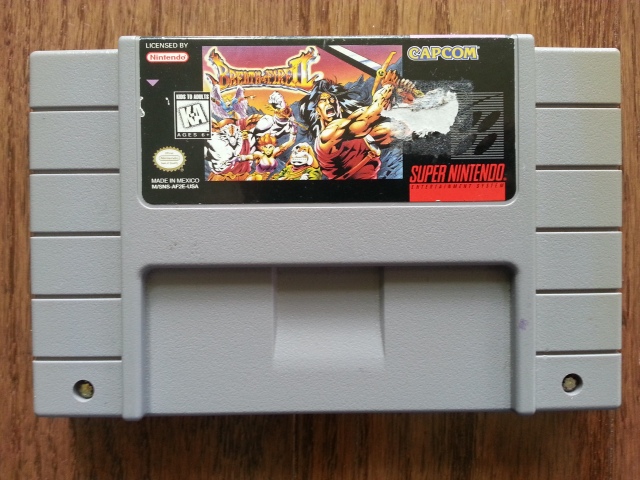 By now, the table with many of the Playstation goodies I had been dreaming about were not being blocked by a wall of eager gamers.  Thankfully my friend had not been picked clean, and there were an absolute ton of PS1 games for the buying.  I had a huge box of trades hanging out in my back seat, so I asked the vendor to put aside a few things while I went and rummaged to find some trade bait.  After presenting my wares and haggling a fabulous deal, the games I got were Wild Arms, Legend of Mana, and Breath of Fire IV!

I can’t quite say exactly how long I’ve been looking for Legend of Mana, but it has been at least two years or so.  The thing that really set my collecting into motion before starting this blog was the desire to find and play Secret of Mana, a game a friend had lent me after I moved to a new city but never had the opportunity to start.  She took her game back and we stopped talking a short time later, and the more I watched/read about the game, the more I wanted to play it.  That need soon extended to other Mana games, and Legend of Mana was launched up to the top of my must-find list.  Wild Arms and Breath of Fire IV were also on my radar since I had several of the other games in both series, but there was something about finding Legend of Mana and not having to pay a cent for it that was a really pleasant experience for me.  I think I traded only five or six other pretty common games for all three games.  It was a smokin’ deal. 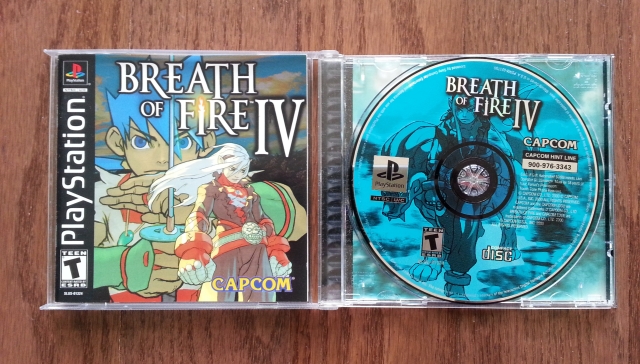 As I continued wandering, I chanced upon another table that had some PS1 RPGs.  These were unfortunately ones bought from my friend before the event started as I had feared, and the prices had been jacked up a bit.  I took a hard, long look at the inventory.  There was a really poor condition Tales of Destiny 2 (the foil on both discs was raised so who knows if that would’ve played), but there were two copies of Tactics Ogre.  I had often seen the game mentioned in many top PS1 RPG lists, but it was never my focus in my initial delve into the Ogre Battle series.  Much of the research I first pieced together was around Ogre Battle 64 and March of the Black Queen (both of which are nearly identical to titles of Queen songs… weird, generally awful Queen songs…).  Despite not knowing exactly what I was getting myself into, I had faith that Tactics Ogre was going to be pretty good.  With a few things to trade still left over, I ended up paying $70 cash and got rid of a few extra PSP games I had.

I was also very appreciative of some of the creativity of the game art.  It was lovely to see a link between Tactics Ogre’s case and manual art.  There are probably many examples of this in other games, but this is the first time I noticed it.  It’s so beautifully done.

Before leaving for the day, one last perusal around the place left me staring at a beautiful deal: Caveman Games!  Another miserable hock shop employee refused to move on their price of $20 for the longest time, and I snagged this beauty for a grand total of $5.  Oh yeah.  I’m very glad I waited!  Now I can do the Wife Toss event all day long without wondering if I paid too much for a game where Wife Toss is a thing.

You might be wondering what a classy girl like me is doing with a train wreck like Crazy Castle.  You can put the blame squarely on the lovely shoulders of my boyfriend, who mistook it for a different Bugs Bunny game.  We are stuck with it now, so one of these days I suppose I’ll try to enjoy it.  Just know that I will do it with a frown that cannot be turned upside down.

That just about wraps up that first swap event.  I wish I had more time to combine both swaps into one seamless post, but I’m desperately trying to catch up on work and also find the time to complete my next video masterpiece: 30-45 minutes of me taking care of Harvest Moon cows that smile constantly and melt my cold, Canadian heart.  If you ever needed a heartwarming video, keep your eyes open for that one.  It’ll be coming down the pipe as soon as I can find a moment to finish editing the beast.

(A message from a future version of myself: https://www.youtube.com/watch?v=hl-iN2-YOJ4)

Hopefully you all had a wonderful Halloween and are keeping warm with all this cool weather that suddenly won’t dissipate.  It feels like every day from now until March should be a blanket and tea day!

Thanks for reading, as always!

30 Responses to There once was a girl who drove a lot to find games.