An update: Mega Man V for Game Boy is gone. I went into the thrift store the other day to check up on it, and the price had been reduced to $79.99 + tax down from $114.99.  It was still way too expensive for me to buy, even if it is rare and a cool game and was reduced to about half of what it’d normally go for on eBay.  A part of me knew I wouldn’t see it again when I left that day, but I hoped anyway.  On some level, I wish I had been bold enough to buy it for that price, but another part of me hates parting with my money for the sake of greedy companies.  I know I complain about this a lot lately, but as someone who really enjoys game hunting in a small town, it’s hard to see the hobby becoming more expensive than it already is.

Goodbye Mega Man V.  May I someday find another copy of you as beautiful as you were.

Anyway, on the bright side, I did find some game guides!  Like all the other prices at that store, the price of guides is also increasing.  I can remember in recent past when game guides were only $3.99.  They later selectively pushed up the price to $5.99 if they were for really “good” games (also known as anything Zelda/Mario).  $5.99 feels pretty steep for that sort of thing, and I was shocked (but not really surprised) to find that some of these game guides were now $7.99 a piece!  There were about 20 of them there, and about half of them I couldn’t bear to leave without.  I am, after all, a sucker for RPGs.

Next up were some great RPG guides for a few Playstation games: Grandia, and Dark Cloud 2.  Now some of you may know to what large extent I dislike the first Dark Cloud, but I’ve heard Dark Cloud 2’s praises sung all over the internet.  I found the game last year and was excited to see the guide pop up for the taking.  Grandia is another grandiose adventure I can’t wait to undertake some day if I ever finish Ultima IV… 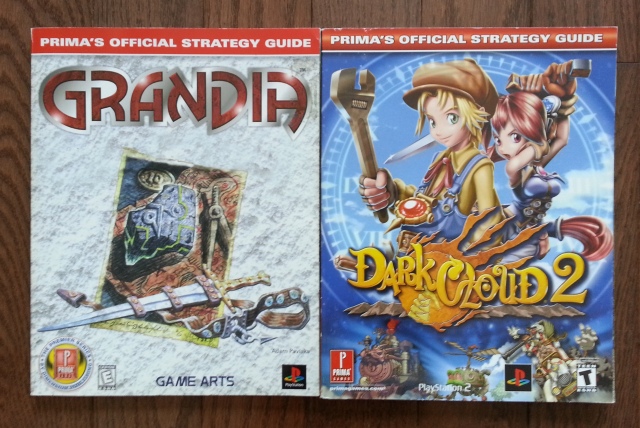 The next two guides were for Final Fantasy Anthology and Final Fantasy Origins for PS1.  I’ve owned these games since I was in my teens and rounded out my collection of other Final Fantasy PS1 remake books when I bought my friend’s game collection last year.  These two I actually went back for the next day after asking around to see if they were worth picking up, and in hindsight, it should’ve been a no-brainer, especially for FFII and FFV!  Thankfully they were still there when I arrived.  Of all the manuals I bought, these were in the worst shape of all.  The Anthology manual is missing a little bite out of its back cover and shows a lot of wear as well, but no pages are missing.  Final Fantasy V has been on my list for a long time, and I’m looking forward to the challenge. 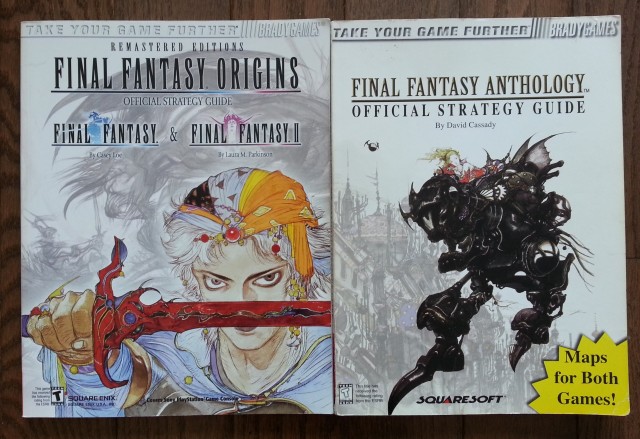 Last but not least, I stumbled upon some Suikoden manuals for Suikoden II, IV and V.  I don’t own the fifth game, but I do have the other two.  I’ve learned today that the Suikoden II manual is quite rare and valuable, and for the price I paid, I suppose it was a pretty good deal.  I was also told that the manual apparently runs players through the beta version of the game, but I wouldn’t know better one way or another since I haven’t played it yet.  Either way, I’m glad to have it!  These manuals were all in really good shape and had the previous owner’s notes still inside on loose papers.  You can see them sticking out of the Suikoden II and Suikoden V books.

Though I don’t normally buy so much paper in one swoop, I can never say no to a good game guide!  Finding these books has reignited my excitement to play through these games.  Work will die down in the next little while and I’ll finally have more time to get back to doing what I love: game collecting, streaming, and LPing!  Since my last post, I’ve really been into Famicom games since picking up Duck Tales and Rockman 3.  Stay tuned for some stuff I ordered off of eBay to make its way here.  I’m trying to find some Japan exclusives that are easy on the English-speaking!

Hope you’re all having an excellent weekend.  Thanks for reading!