The Most Ninfundo You’ll Ever Have

Even though the snow keeps on coming out here in these parts, it seems that people are finally getting into Spring Cleaning Mode and are dusting the cobwebs off of all their old games to sell or purge.  As you likely know by now, I’m not the type to pass up a good deal when I see one, and the good deals are slowly peeking out of the darkness.  I picked up a whole pile of stuff for $120 from a really nice young man just today, and as usual, there were some real winners!

So as not to be accused of misleading anyone with my catchy title, I will include the non-Nintendo games first.  There were three Intellivision games that we were surprised to find since they were not listed in the ad.  I haven’t fired up the old beast in a long while now, so this will give me an excuse to try it out again.

The next bunch of games were for the Game Boy: Super Mario Land, Star Wars, Super Return of the Jedi, and Nemesis.  I didn’t have either of the Star Wars games, and from what I can tell, these are the same titles that were also released on other more “robust” systems.  It’ll be interesting to play those and see if they’re different or truncated from those other versions.  It was also nice to get a nearly pristine copy of Nemesis.  Another copy I already had has a torn label, and I didn’t have the booklet before now.

Though no Game Boy Advance games were included in the game lot, an indigo GBA was in the box along with everything else.  Thankfully there were no batteries left inside.  More often than not I’ve opened up an old handheld to find corroded batteries oozing away behind that battery door.  The screen only has one tiny scratch, but it works! 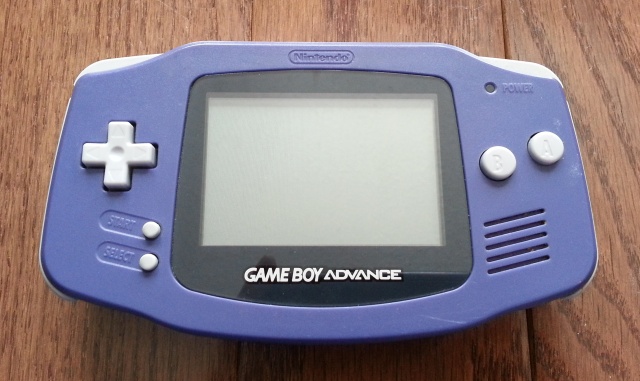 We also found a few things for the SNES.  In addition to the Game Boy Star Wars games, we also got a copy of Super Star Wars.  I’ve heard that this game is really difficult, but I’m up for the challenge of a hard platformer.  Also included was a second copy of Aladdin with a much nicer label.  Our other copy was pretty mangled.   I only remember renting the Genesis version.  I never had a chance to try out the SNES version of the game, which is apparently entirely different.  The Super Game Boy is also a really excellent thing to have around.  It’s good to have a backup in case something ends up happening to my first one.  You can never have enough Super Game Boys.

There was an N64 game (A Bug’s Life) and a 3rd party N64 controller.  I was really surprised at how convincing the fake N64 controller looked.  It feels really good to hold and the analog stick feels nice and snappy.  I’ll be curious to know if it’s as good in practice as it seems in principle, but I haven’t had a chance to test it yet.  A part of me wants to carve “Nintendo” into that tempting little space up there just to make it all the more convincing. 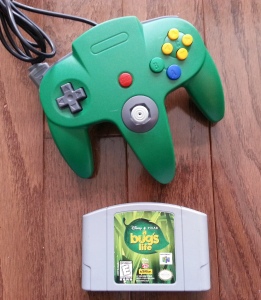 On the topic of controllers, we also got a few for the NES, and a weird 3rd party monster of sorts for what appears to be the SNES with a tiny screen that I have yet to try.  There is also one of those horrible aftermarket controllers with the cord that comes out of the side instead of the top and has more buttons than it should.  I remember accidentally ordering two controllers very much like this one when I was young and stupid, but unlike this one with what seems to be a 6 foot long cord, the ones I ordered had a cord of about 3 feet in length, if that. They’re ridiculously short and feel like they might explode if you hold them too hard.  I still have them as a reminder to read ads thoroughly before buying!  We also got an NES zapper, but I didn’t show it here because I’m horrible and forgot to include it in the photo.  Also, I’m also not too sure where this circuit board overlay sticker came from.  Anyone know?

Since you’re seeing NES controllers, you must be wondering: are there any NES games?  The answer to that would be yes.  We got 13 NES games in total, and the first one, Bigfoot, we got with its box.  I tested this one out awhile ago and despite it seeming like a cool monster truck game, what little I played of it had me being a monster truck, but I was racing another monster truck instead of smashing things with my giantness.  Maybe there is more to it than a short test might reveal, but that has yet to be seen. 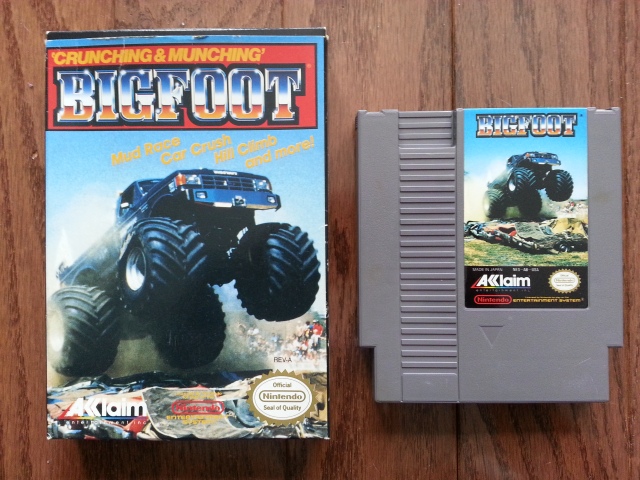 The other games were all loose, and only one came with its manual.  There are lots of sports games here and some we already have, but the price of the lot was worth it for the games on the right side of the photo alone.  I’ve been pretty desperate to find a copy of Maniac Mansion for a decent price, and thankfully that’s the one that came with its manual!  I’m not sure how different the game is from its PC counterpart, but I’m curious to try it out.  It was also nice to find the Zeldas and a copy of Final Fantasy that I’ll be able to give away to a friend of mine or trade at a game swap.  I was intially really excited to find Tale Spin, though I’m not sure if it’s the game I thought I remembered from childhood.  Popping it in for a test didn’t jog my memory like I thought it would, so there’s some elusive fleeting childhood memory floating around in my brain that I thought was Tale Spin but is actually another game.  I’ll find it some day! 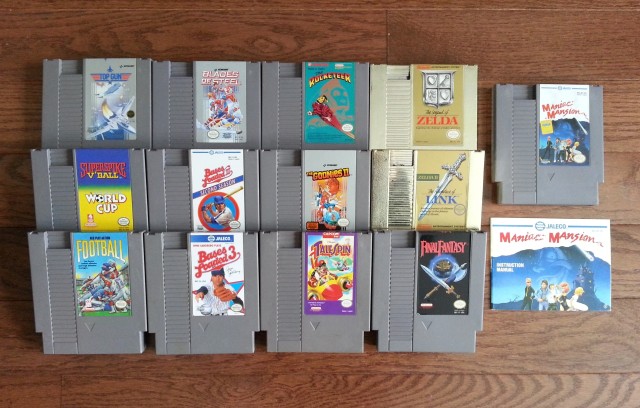 The last thing we got in the $120 lot was a Retro Duo machine that plays NES and SNES games.  I’m curious to know if the S-video signal coming out of it will be any better than my original hardware that only outputs in composite.  I’ve never had this kind of machine before so I’m interested to see how it’ll perform versus the real deal.  I hope it doesn’t eat games for breakfast or something sinister like that.

Apart from the lot mentioned above, I’ve been doing a bit of online shopping as well.  Since finding a few Famicom games a few posts ago, I’ve had a bit of a fire lit to find some Famicom exclusives that are native English speaker-friendly.  I found a short list of some interesting ones and ordered them from Japan.  The most expensive game by far of this lot was Holy Diver which I paid over $100 for, but the rest were between $10-30.  After barely spending any money on games for months, I thought I could afford to splurge a little bit.

Akumajo Special: Boku Dracula-kun (Kid Dracula, top left) is my my substitute for the Game Boy version of Kid Dracula that I’ll likely never buy for its current asking price.  I’ve heard that the Famicom version of the game is really well done and accomplishes much of what the Game Boy game does, but with a little more controversy.  Apparently some sprites were deemed unfriendly for North American audiences, which is why it wasn’t localized.  Too bad… it has mostly to do with a hooded figure in white with a manji on its costume.  There was a manji dungeon in the Legend of Zelda and that sure didn’t stop that from being localized, but I digress…

I fell in love with Yume Penguin Monogatari (top right) when I watched a video on Penta the penguin and saw some gameplay from it.  I first encountered Penta in Antarctic Adventure on my 72-in-1 Cartridge Story pirate cart from childhood and used to sing Skater’s Waltz at the top of my lungs while shuffling around pits and avoiding seals.  This Famicom game takes Penta and throws him into a unique adventure where his girlfriend has left him because he has become overweight and won’t get back together with him until he slims down.  Seems like a silly premise, but the game’s bad guy literally has his thugs throwing food at you to keep you overweight, and it makes me laugh.  It’s a fun platformer that I think everyone would probably enjoy.

Valkyrie no Bouken: Toki no Kagi Densetsu (bottom right) is an 8-bit RPG that has virtually no text at all.  All the information you need about items and how to use them is in the manual, which has thankfully been translated.  It’s a wander-fest, and its lack of Japanese text was the appeal to me.  This was the cheapest of the four.

Holy Diver (bottom left) is supposed to be very much like Castlevania in gameplay style and aesthetic, and from what I’ve read and seen of it, I love it already without having played too much of it.  It has the protagonist casting spells and being generally badass, so I think it’s going to be a lot of fun.  I’ve also had the song Holy Diver stuck in my head for weeks since I first learned of the game.  You’re welcome.

Last but not least, I paid a visit to a friend of mine that owns a game store recently and picked up a few more NES games.  I had been looking for the remaining two Dragon Warrior games I was missing and found them at the shop.  Dragon Warrior II was sitting there with a price tag of $50, and when I showed some interest in that, my friend told me he had a boxed copy of DWIII hanging around too if I wanted it.  It was boxed with its manual but was missing the map and monster information, and he had a nasty price tag of $175 on there.  I had brought in a bag of trades, comprised mostly of extra copies of PS1 Final Fantasy games.  We ended up doing a straight trade for everything after I complained about a peeling label, the generally meh condition of the manual, and some box troubles.  He was quite happy to have both of the games going to a good home.  Here’s a photo of the two Dragon Warrior games I picked up.

With those, I finally have the entire NES Dragon Warrior bunch!  I have probably mentioned it before, but a few summers ago I was looking through classifieds ads and there was a person selling all four games for $150.  I was 15 minutes late phoning the owner of the ad and the games were already sold.  I’ve thought about that bitterly for the past few years as I’ve seen the prices for these games go higher and higher, and thankfully now I can stop thinking about it.  In all its current glory, here is my whole little Dragon Warrior NES collection! 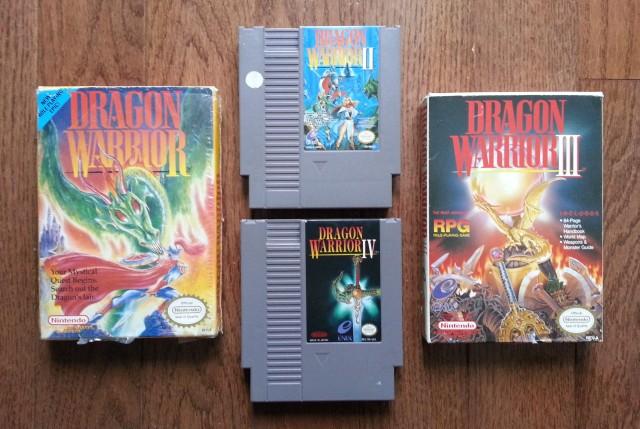 I was really happy to find all these awesome games, and with great Nintendo power comes great responsibility – I have to catalogue and play everything!

I hope you’re all well and that you have some exciting gaming plans for the weekend.  I’ll leave it to CheapBossAttack to probe everyone about what they’ll be playing this weekend in his Freakin’ Weekend post, but I will send out well-wishes to you all.

14 Responses to The Most Ninfundo You’ll Ever Have