With respect to game collecting, this summer has been pretty fruitful so far.  I’ve had no yard sale luck yet, but the classifieds and thrift stores have been good to me, and I’ve also found a few games online for a decent price that I decided to purchase that way.

The first set of games came from an antique show.  We’d heard through some people in town that there might be some video game vendors at the event, so we popped in there to see what was what.  The first table I went to had some really interesting games but the prices were sky-high, the seller was not really negotiable on prices, and I decided to see what else was there.  A little sleuthing later and I came upon a table that had some games for $2 each.  I picked up two NES games: Star Tropics and Legacy of the Wizard.  I already own a copy of both of these, but I hope to put them toward a trade in the future to get something else I might like.  The stickers stuck on the front of Star Tropics are more or less fused with the label, unfortunately.  Legacy of the Wizard was in good shape all around.

From the same vendor, I chanced upon two Intellivision games: Advanced Dungeons & Dragons, and Zaxxon. There were several others in the mix but I was pretty sure I had most of them already.  The boxes for both games were in very poor shape, but it’s pretty rare that I’ve run into good condition Intellivision games in my searches.  Advanced D&D came with its overlays and an instruction manual, while Zaxxon just came with a manual.  I’m not sure if overlays exist for that game or not.  The instruction manual doesn’t show anything involving them, so I’m hoping that that’s the case.

Continuing the trend of $2 games, I happened to stumble upon two at a local thrift shop.  The first was Star Ocean: The Last Hope for XBox 360.  I have yet to start into the series at all, but I’ve heard from many that it’s a pretty decent one.  I’m not sure about what the reviews are like for this particular installment, but the discs were in excellent condition and for a few dollars, I really couldn’t resist picking it up. 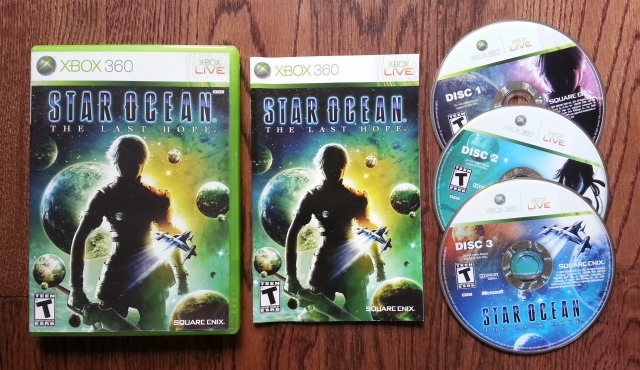 The second thrift store game find was Build-A-Bear Workshop: A Friend Fur All Seasons for the Wii.  I’m usually not one to buy up shovelware, but this game looked like it might have some small degree of promise.  Like Star Ocean, this game was in pristine condition and would’ve been hard to pass up.  I have no idea what’s in store for me with it, but I can’t leave a game behind!  Especially not one with such a lovely friend ship on the cover.

I also ordered a few games online recently, and one was Plok for the SNES after I was sold on it by a fairly positive review video.  I enjoy a challenge and seem to only have RPGs or commonly known games for the SNES, so this one was an easy decision for me.  The game came in excellent condition, and I’m happy to feel slightly more diversified in what I have for the system.  Just slightly.

Last but not least was a game for the Sega Genesis: Rolo to the Rescue.  Before I went to the last swap, I had poured over many “best games for X system” lists.  Rolo to the Rescue was mentioned in a top 100 and after looking into it a little, I thought it might be something worth picking up.  It has mixed reviews in other places, but I tend to like games that aren’t quite as shiny as the rest.  It’s cute and it’s Genesis, so what could possibly go wrong?

And thar she blows, folks.  Another few games to add to the mix with more to come.  I’ve been perusing the Sega Master System’s PAL region library lately, so hopefully I’ll be able to come at you with another post soon once all my mail arrives.

Thank you for reading, as always.