As you might imagine, in the midst of COVID-19’s grasp, there is very little going on out there in the world for in-person video game conventions and swaps.  All the wonderful summer plans for travelling around the province in search of some elusive titles are cancelled, and that’s perfectly fine by me as long as people are safe and sound at home, where they should be.  These cancellations have left me with very few options for game collecting, but I’ve managed to find some good deals online and keep things rolling, albeit at a snail’s pace, compared to usual.

The first few games I picked up were for the Game Boy and Game Boy Colour.  The first is a Japanese copy of Rockman World 4, which for all intents and purposes is exactly the same as the English version of Mega Man IV, but significantly less expensive. The Mega Man games on Game Boy are typically mashups of the NES titles, with the exception of Mega Man V which is its own standalone game.  And if you know me even a little bit by now, you know I love Peanuts and the characters a ton… Snoopy Tennis for GBC was something I couldn’t resist.  It’s actually a very competent Tennis game, and while I haven’t played a lot of them, I could definitely win a few matches here.  That says something! 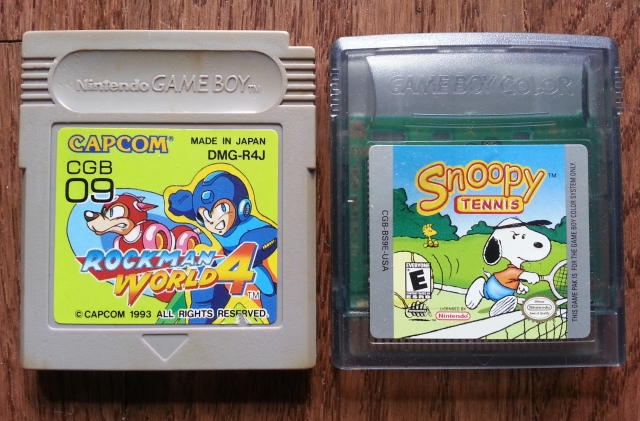 Continuing in the handhelds department, I finally (finally!!!) found a copy of Castlevania II: Belmont’s Revenge for the Game Boy.  I’ve been wanting to find it for so long and I got one for a really good price online with a bunch of other games.  I was surprised since it wasn’t a North American site I was buying from but it was the US cartridge, so I scooped it up.  I got most of the way through the game up to the second-to-last boss and got wrecked… I’ll have to try it again soon and get that sweet win.  Teenage Mutant Hero Turtles III: Radical Rescue was a game recommended to me by a friend that apparently plays like a Metroidvania game, and loving Game Boy and those kinds of adventures, I couldn’t stay away.  I haven’t played it too much yet, but it does seem like a great game that I’m interested in trying some more. 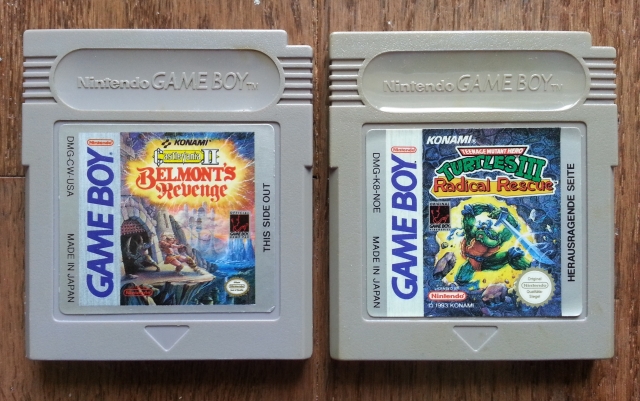 Bravely Second for the Nintendo 3DS was also suggested to me as a must-have by a friend.  I picked up the first game recently and the second one here came to me sealed from The Great Internets.  I don’t know when I’ll get around to playing it any time soon, but seeing that the series is touted as one of the best RPG series of all time, I might have to move them up the list. 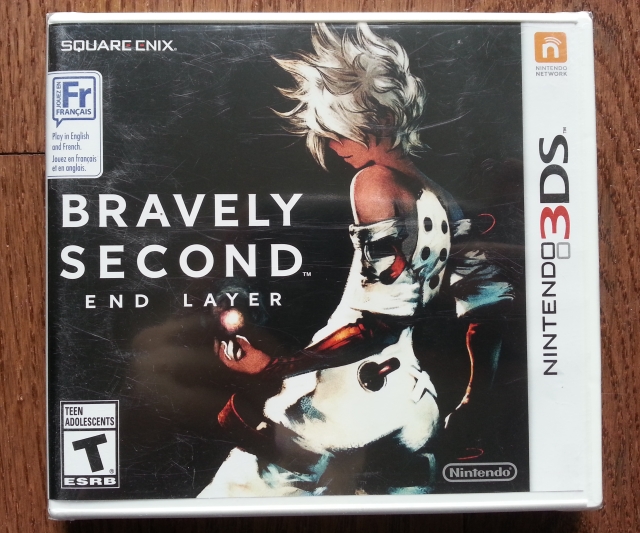 I put out a video recently talking about how Life Force for NES is essentially a great model for the immune system, and in the comments section, lots of people were asking if I’d ever played Abadox since it’s apparently really similar.  I’m terrible at shooters and I’m sure that hell will freeze over before I get any better at them, but I decided to pick this up anyway.  It’s a little ugly and I have to give it a good cleaning.  That yellowing on the right side is some dried glue of sorts, and the label’s pretty grimy as well.  Otherwise though, it’s in great shape. 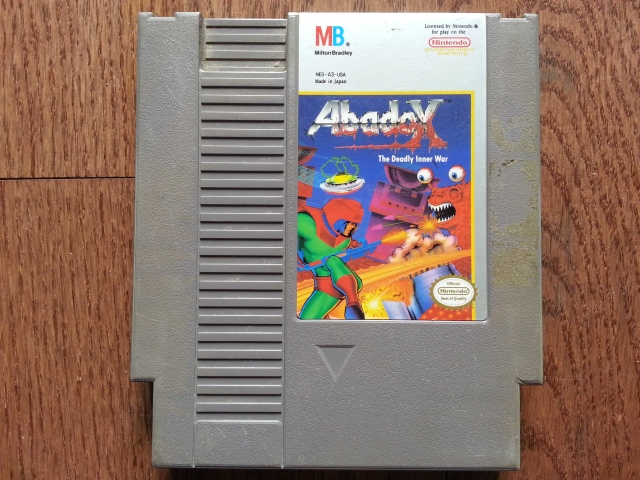 After playing Lizard for NES recently and loving it, I had a few other new NES homebrew games recommended to me to try.  I picked up Micro Mages and Twin Dragons, both of which are still wrapped up nicely since I haven’t had a chance to try them out yet.  They’re both able to be played on original hardware, so I’m looking forward to seeing what these are both all about. 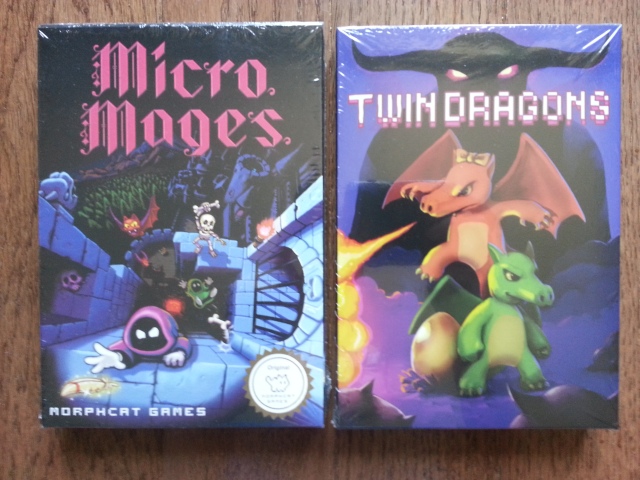 Mickey Mania for SNES was a gift from a dear friend that I wasn’t particularly seeking out, but considering my deep love for Mickey Mouse games, I honestly can’t wait to give this one a spin.  I grew up with World of Illusion on Sega Genesis and have really enjoyed other games like Land of Illusion, as well as another Mickey Mouse SNES game with the tremendously long title that I can never remember.  It’s a great addition to the collection and was well-loved by the previous owner.  I’m honoured to have it! 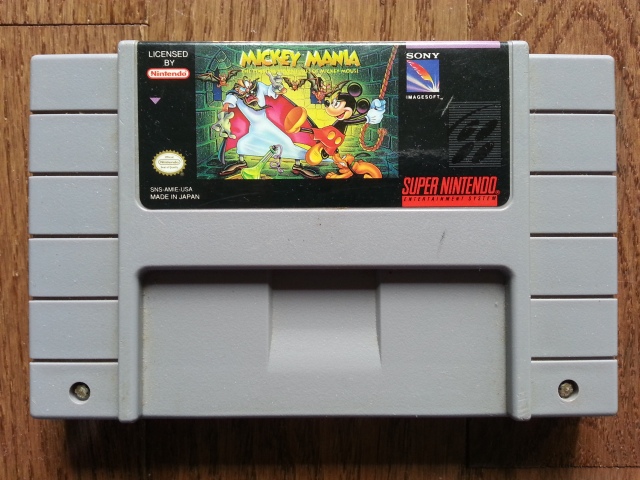 I couldn’t get away with a collecting post without showing off some more Master System.  Robocop Versus the Terminator is pretty decent despite a bit of a choppier pace than its Sega Genesis counterpart, and Star Wars is probably the smoothest of the bunch.  Double Dragon is… well… interesting.  The NES port looks a lot more playable and the soundtrack is undeniably better there too.  The SMS version plays a little closer to the Atari 2600 one… I don’t have regrets buying it, but it’s an experience.  I’ll just leave it at that. 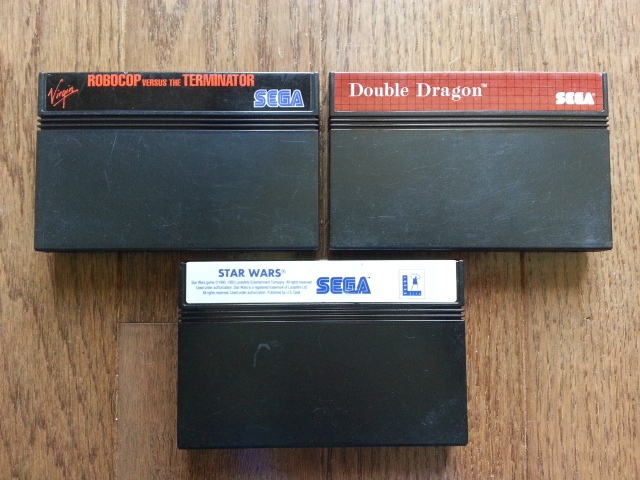 Ghostbusters for the Master System came to me in relatively good shape.  It’s a slightly better version of the same game that was released for the NES, mainly because of its superior stair-climbing section near the end that isn’t an abomination like its Nintendo brother.  It still plays the Ghostbusters theme nonstop though, and it doesn’t sound quite as good as the NES version… uh oh. 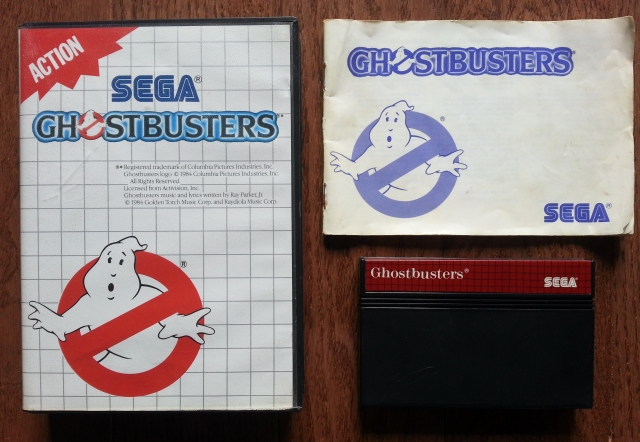 The Newzealand Story, also known as Kiwi Kraze for other releases, is another PAL-exclusive Master System game that I actually didn’t realize won’t run properly on an NTSC system.  I thankfully had a third party power base converter to try on my Sega Genesis on hand, and it works just fine that way.  Something in the NTSC Master System causes a few PAL games to be region-locked, and this is one of them.  Either way, this game is in gorgeous condition, especially the manual that’s still white rather than yellowish like some of the other ones I’ve come across lately.  I’ll probably play this one with the volume low because the frantic music here is quite distracting, but the cuteness shall always prevail. 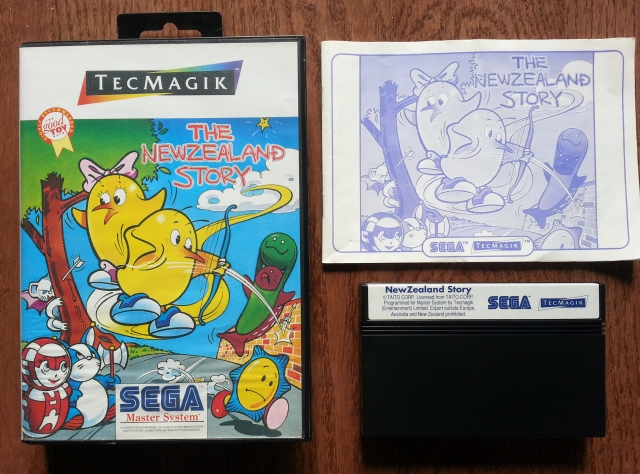 I mentioned earlier how awful I am at shooters, and yet there were several of those purchased for the Master System that I’ve had my eye on for a while now.  The first is Scramble Spirits, which I was secretly hoping would be more in the vein of something like Avenging Spirit, but instead is just a neat little middle-of-the-road shooter game with a cool soundtrack.  The sound effects are a bit grating, but all in all, it looks rather promising.  I got destroyed in the first few stages, but hopefully I’ll be able to get somewhere with a bit of practice.  Despite being in relatively good shape, a manual was nowhere to be found. 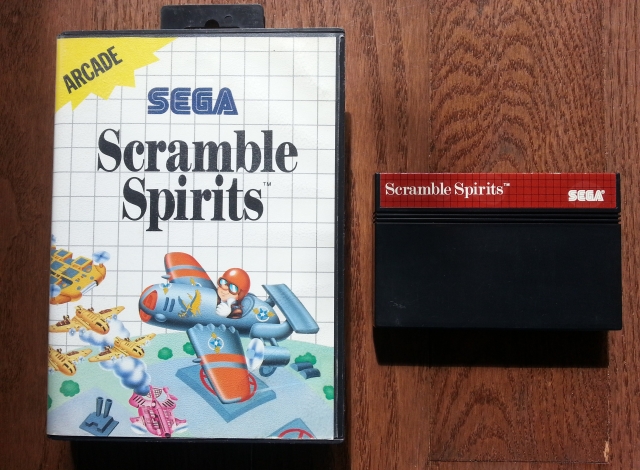 Ah yes, more shooters!  Sagaia is a port of Darius II for the Master System, and it’s a tough, tough game.  I don’t think I got very far into stage two before I had to quietly turn it off and vow to come back to it another time with my obliterated pride reassembled, but it’s a very sought-after title that I’m glad I now own for the system.  I’m okay not owning the manual for this one, but it would’ve been nice to find it complete. 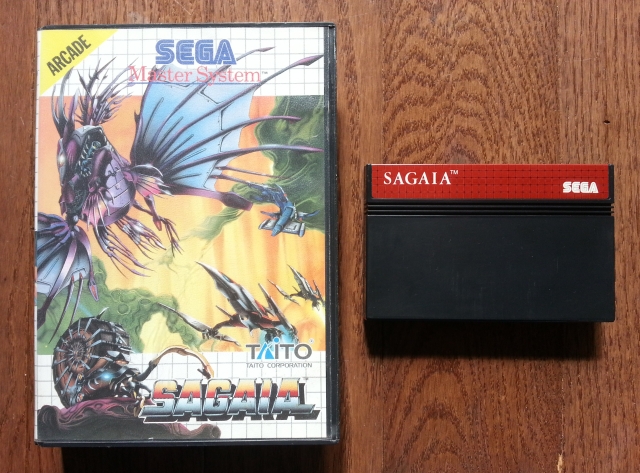 Sonic the Hedgehog Chaos is a PAL-exclusive game that is relatively difficult to come by for a good price, but I’ve often heard it touted as one of the best Sonic games on the Master System.  Grabbing this one with its manual was a real bright point for me in these new additions since I love Sonic, but have yet to experience many of the games on the SMS.  I’m really looking forward to trying this one out further than the first level. 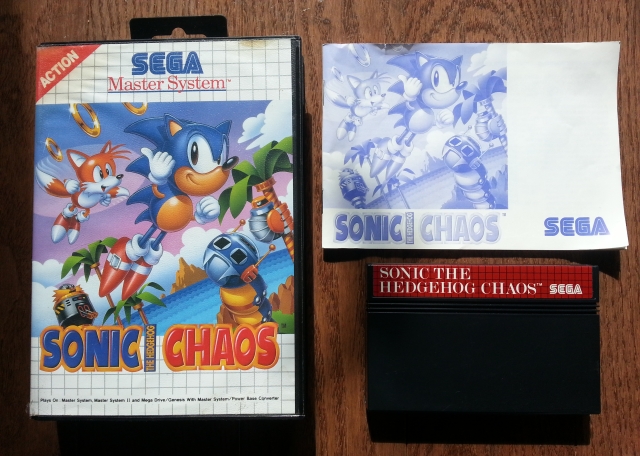 Ah yes. The game with one of the most horrible soundtracks in the entire history of time, and some of the most confusing title screen music has finally weaseled its way into my collection.  Bram Stoker’s Dracula was released for other consoles as well, but the Master System version spoke to me when I was recently playing through many, many other Dracula-centric games like some from the Castlevania series.  It seems like a competent enough platformer with some interesting graphics, but it’s pretty unforgiving from what I’ve played of it so far.  The manual’s a little beat up, but it’s because it’s so thick and doesn’t fit well inside the case’s clips.  Those PAL manuals man… they’re beefy with the 8 or so languages they’re published in! 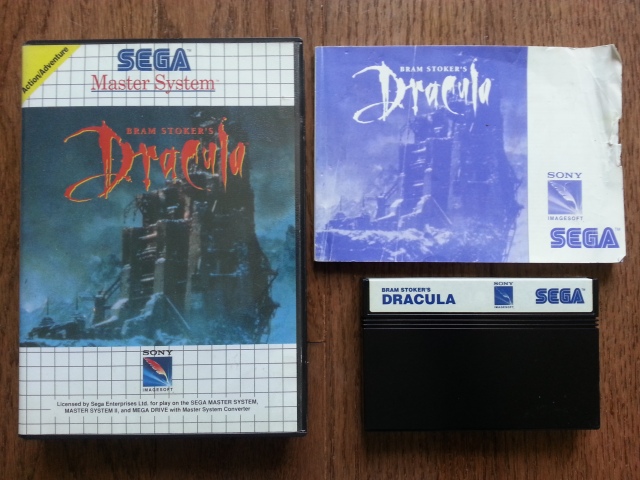 More shooters, you say?  Why yes.  R-Type’s release on the Master System came to me with a cool Sega for the 90s sticker stuck onto the label, and the game art glued to the box like some horrible monstrosity.  The outside plastic is missing altogether and there’s no way that art is coming back off again, so it’s an ugly little mess on the shelf (don’t even look at the right edge and corners to see how crooked it is…) but at least I can get myself exploded a little more.  As if I haven’t suffered enough already! 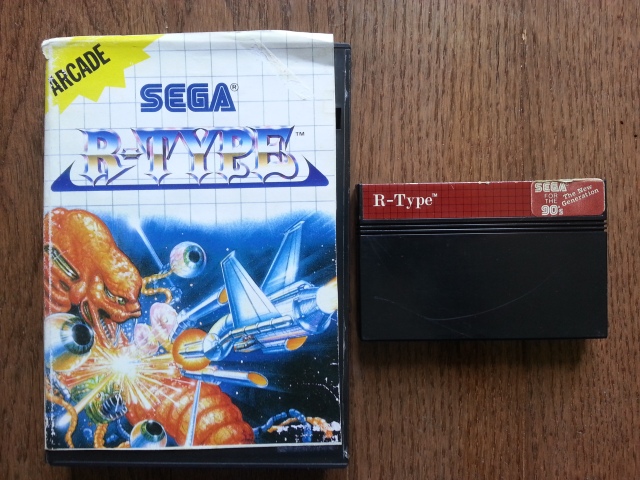 Last but not least is one of the disappointments of the lot, a Sega Card version of Bank Panic.  I didn’t own this game in cartridge form at all, and seeing the card option was something I thought would be a neat addition to the collection.  Unfortunately, no matter how hard I cleaned it up, it still won’t play.  I know the card slot is working because I have several other games that work first try, and I even tried it on a few different consoles.  I think it’s completely dead, and that makes me sad.  I don’t have the heart to give up yet, so I’ll hang onto it for now and continue to try to think of ways to bring it back to life. 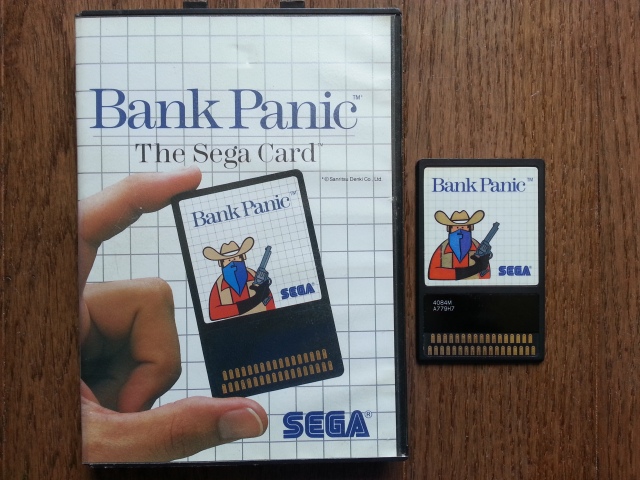 And well, that’s just about that.  This is obviously several months of collecting, so I’m thinking these posts will continue to be fewer and further between with the state of things out there in the world.  Hopefully you’ve all been keeping well, staying safe, and playing some great games.

Thank you for reading, as always!