Posted on September 10, 2018 by hungrygoriya

The classifieds have been right up my alley lately.  I’ve found more games I was looking for in the last few weeks than I have all summer long and it has been such a welcome thing finding things again!  I’ve had the pleasure of dealing with two people with extras lying around or that were selling off parts of their personal collection, so the quality of the games I’ve been picking up have mainly been good.  No surprise water damage, no bad contacts or broken traces on boards… just good, clean games.

The first person I picked some games up from was a nice man who had lots of doubles.  He had listed a huge pile of common games, most of which I had already.  I did get a few things from him and the first two games were Ninja Gaiden and Ninja Gaiden II: The Dark Sword of Chaos for NES.  These games look to be tough as nails and beyond my skill level and capability at the moment, but I’m hoping that I’ll be able to practice and defeat them some day.  I know a few folks that have had luck beating the first game, so there’s hope for me at least!  I honestly thought these games would be more expensive for some reason, but they were both pretty cheap. 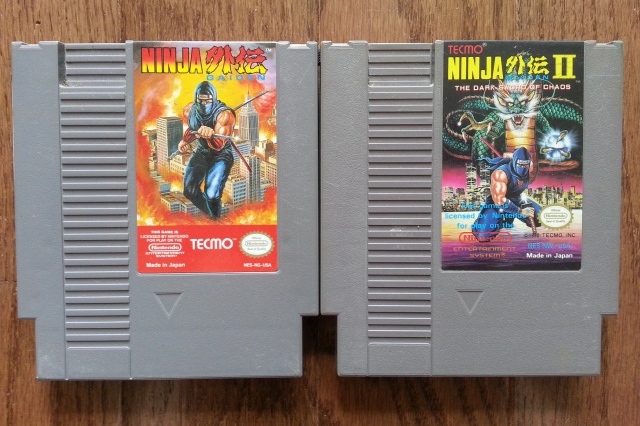 I also got two other games from the same person, and they are Bugs Bunny Rabbit Rampage for SNES, and Donkey Kong for Game Boy.  I honestly picked up the Bugs Bunny game on a whim and haven’t given it too much attention yet, but Donkey Kong was something I had been looking for for ages!  It’s constantly on Top 10 lists of Game Boy games because it’s not just the regular arcade game.  It is for about four levels and then it switches gears to become a platformer/puzzler with a lot of charm.  The cartridge unfortunately has a bit of wear on its label, but it turns on and works just fine.  That’s all I can ask for from a Game Boy game that was clearly well-loved and must’ve been stuck in a Game Boy for a very long time.  I paid $45 for these and the two Ninja Gaidens, so that wasn’t altogether too bad! 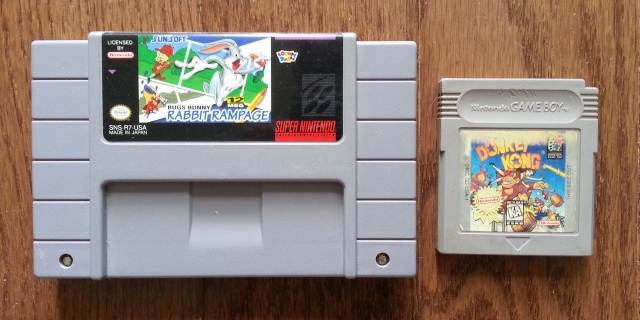 Another classifieds ad was practically all about Sega, and you all know how I love my Sega! There were lots of great games in his list, and a very diverse and expansive collection.  By the time I got around to answering his ad a few things were already reserved by others but I did manage to sneak in and get a few things that I was missing for my collection.  The first was a bit of a disappointment: Operation Wolf for the Sega Master System.  Operation Wolf is one of a few known PAL region games that are incompatible with NTSC systems.  I should’ve known better about this one but had my fingers crossed that it might magically work out.  The game turns on just fine but it doesn’t allow you to control anything and you end up dying immediately.  The guy threw it in for free for me since he knew of these issues, so at least it’s nice on the shelf.  If it were heavier, I might turn it into an anchor.

He had another Master System game that I wanted: Zillion II.  I went through a lot of rigmarole to get my hands on the first Zillion game and had been looking for the second.  This one was definitely priced to sell and even though it’s just a short little game, I thought it might be fun to try out.  From what I understand it’s completely different from the first game and is more focused on action.  While testing it out I think I died almost immediately, so that should be fun.

The seller also had games for most of the cartridge-based systems, and he had a really good condition copy of Tiny Toon Adventures: Buster’s Hidden Treasure.  I used to rent this game pretty regularly growing up along with things like Toejam and Earl: Panic on Funkotron and Ren & Stimpy, and I remember the game being fun but difficult for some reason.  I was thrown right back to my teenaged years with the title screen and after about an hour of playing, I put it away for another day.  I’m looking forward to finally beating that one sometime. 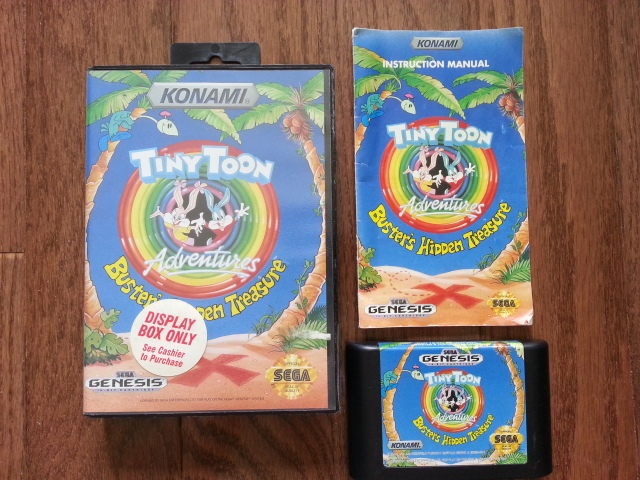 Lastly from this person, he had some games for handheld systems.  For the Game Gear, I got my hands on Shining Force: The Sword of Hajya.  Now I can cool off my quest to find Shining Force CD and focus on playing this version instead!  The only Nintendo game I got from him was for the Game Boy Advance, and that was Lady Sia.  I had seen this game at a local hock shop countless times for $30, and I’m glad I waited. I got a pretty sweet deal on all these games overall.  I think I paid $75 for everything.

The last bunch of games I picked up I found at a game store I visited.  The prices for NES games were remarkably reasonable, so I picked up Astyanax and 8 Eyes for $10 altogether.  I have a feeling I’m going to want to ear 8 Eyes a new… eye? after playing it for a while but I think it’s well worth trying out. Astyanax had me at the dragon and swordsman  on the cover.

The last two games I found at the store were for the N64.  The first was a game I’d been looking for for a friend of mine for a long while, and that was Starcraft 64.  The game’s label is pretty beat up and I think I’d rather try Starcraft on the PC at some point, but I’m glad that I finally found it for my buddy.  The other game was Aidyn Chronicles: The First Mage, one of the very few RPGs for the system.  Though it received mainly mixed reviews online, I’m hopeful that it’ll be a decent game. Hopefully I’ll be able to find a manual online to help orient myself when the time comes!

Well that was certainly a mouthful.  I’m sure since the gaming gods have smiled kindly upon me over the past few weeks that I’m destined to find nothing else until 2019, but thankfully I do have a few other posts in the works.  I’ve been to a swap and am still getting some photos edited for the post I’ve been working on about picking up an arcade machine, so stay tuned for those.

As always, thanks very much for reading.

11 Responses to Mishmash – My Favourite Kinds of Game Potatoes