I am a Game Magnet

Posted on November 3, 2019 by hungrygoriya

Over the past few weeks, I’ve been very lucky in being able to find some wonderful games to add to my collection both locally and online.  Some of these things I’ve been looking for over a long while, and others are things I took a chance on without knowing what to expect!  Sometimes you just have to jump on a deal when it surfaces, and I was pleasantly surprised all around!

First up is the Mega Man Anniversary Collection for Playstation 2.  I do own the GameCube collection, but I heard that they did something weird to the controls.  Maybe they switched the buttons around?  I can’t quite recall now, but I was advised to pick up the PS2 version for a more approachable experience.  As someone who has never beaten a single Mega Man game, I’m glad to finally have them all in one place since my physical collection is sparse.  The disc isn’t in the greatest shape, but I’m sure it’ll spin up whenever I get around to testing it out.  Also, the manual here is completely in French!  Sometimes Canadian games came with two manuals for English and French readers, but here, the English one is missing altogether.  My French is terrible at best, so hopefully I can figure things out and won’t need to rely on it too much!

Sticking with disc games for the moment, I found two for the Wii U, the first of which is Hyrule Warriors.  I think I’m incredibly late to the party on this one and have no idea whether or not it has a story mode for single player, but I’ve never seen this game so cheap and couldn’t resist picking it up.  The disc was in excellent shape overall, but the case itself had a bit of scuffing on the outer plastic and was also really dirty.  I cleaned it up the best I could.

The second Wii U game is Pikmin 3! I have been looking for the third installment in this series for many months now, and I finally found it for a good price.  It came with all the inserts as well as a now-defunct Club Nintendo code, and like the disc for Hyrule Warriors, this one was in virtually perfect condition.  I still have yet to play any of the Pikmin games, but from what I’ve seen, they look fun and relaxing.  I’m hoping for a Katamari Damacy-like experience when I finally sit down with it.

I was also really lucky to find two Game Boy games.  The first I bought online, and it’s Dinosaur’us for the Game Boy Color.  This was the turn-based RPG I would’ve never expected to exist in the slightest given how unconventional it is, and after I learned of its existence, I sought it out and finally have a copy of my own.  I didn’t get too far into it, but at a first glance, it involves some sidescrolling platformer action with turn-based battles against enemy dinos.  There’s a whole levelling system with skills involved, so it’s quite the endeavour.  Space Invaders was also a great find.  It’s one of a very small set of games that, when used with the Super Game Boy, gives you the option to play a separate, full game on the SNES.  This one lets you play the arcade version of Space Invaders, which took me straight back to my days of playing the Commodore Vic 20.  What a blast! 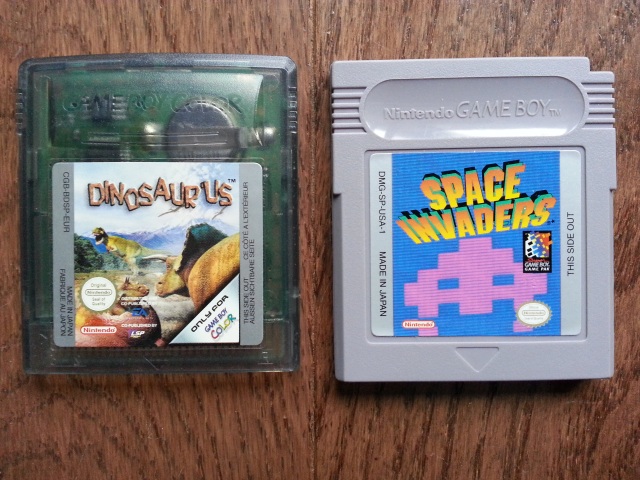 Another game that pleasantly surprised me was an SNES game called Speedy Gonzales: Los Gatos Bandidos.  I took a chance on this one.  Prior to buying, I’d never heard a peep about it, but it is actually really good.  I played it for about 15 minutes to test it out, and everything feels really fluid and smooth, and the music is something else!  I’m very surprised at how good the first few levels felt, so I can’t wait to play it for a longer time and see more of it.  This is probably the worst game of the bunch aesthetically, with a worn label, especially at the top toward the end label portion.  It definitely looks like it was loved.

On the opposite of the impressiveness spectrum is Disney’s The Little Mermaid: Magic in Two Kingdoms for the Game Boy Advance.  Now, I might be jumping the gun a little on my feelings for this game, but I was not pleased trying it out for a few minutes.  It feels like one of those hand-holders that tutorial-izes every moment, and all of the characters feel like they’re moving at a snail’s pace.  I’m not sure if anyone has played the Sega Genesis Little Mermaid game, but the controls are reminiscent of those in my mind.  Hopefully I’m wrong about the impending terribleness, but for a few dollars, I’m not complaining.  The title screen music was really great at least!

I recently managed to fight my way through Castlevania and Castlevania III: Dracula’s Curse for the NES, and Castlevania has definitely been on my mind more often than not over the past few weeks.  I already owned two other Castlevania games for the DS, but when I saw Order of Ecclesia, I had to jump on it.  It was not cheap, but it definitely wasn’t the going rate on eBay at the moment either, and I’m happy to have finally completed the DS Castlevania trilogy.  My better half has played a lot of this one and really enjoyed it, but he lost his copy a long while ago.  It’s nice for him to have that back again.  Other than a bit of brown gunk on the case, the rest of the contents were in great condition.

I found quite a few games for the Sega Master system as well.  I have a huge fire under my butt to keep seeking out games for this amazing little console, and I’ve chanced upon some really excellent deals over the past little while.  For some reason, most of the games I’ve purchased haven’t come with their manuals… I wonder what happened to them all?

The first game I bought was Shadow Dancer: The Secret of Shinobi.  The game came to me with a wavy case art sheet as if it had been wet at some point, but it’s not damaged in any other noticeable way.  To be honest, I’m not really sure if this game is a good purchase for this particular console, but I’ve heard the Genesis version is pretty awesome and wanted to see what this port might be like in comparison.  I recently found the Master System port of Ghouls ‘n Ghosts to be surprisingly well done and different from the many other iterations out there, so one can only hope that this Shinobi game will follow suit. Here’s a review I did of the GnG game:

Getting back to Shadow Dancer though, there’s a longplay online that takes just over 10 minutes.  Maybe very easy for a seasoned player but a welcome challenge for a newcomer?  Only time will tell!  I need more Master System in my life! 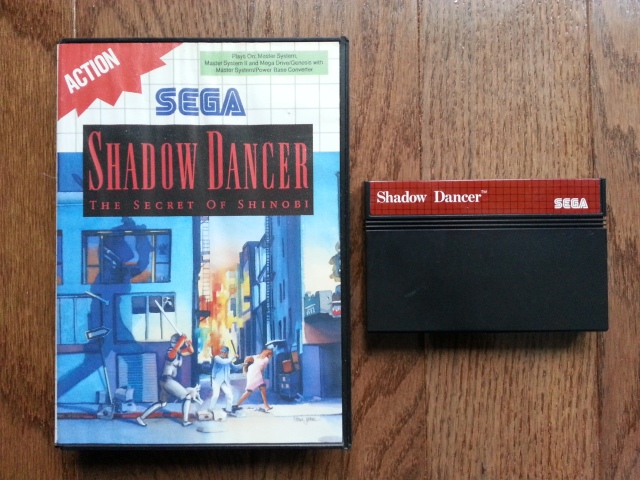 Next up is Impossible Mission, a port of a game originally released on the Commodore 64, the Atari 7800, and a variety of other early computers.  It’s not to be confused with Zillion, which I feel it strongly resembles.  It seems like an interesting and unique action game from what I’ve seen available for the SMS, and it was extremely cheap.  How could I say no to an adventure?  It does look tough and also seems to require a great deal of mapping, things I don’t shy away from in the games I play.

Sigh.  One of the games I was most excited to see posted lately was Fantastic Dizzy.  This is a game made by Codemasters and was an unofficial release for the console, and it’s on the more uncommon side.  I immediately pounced on this purchase not realizing that it doesn’t work at all on NTSC systems, and unfortunately I’m now stuck with a game I can’t play at the moment.  I’m going to do a bit of research and see if I can get things working, specifically if there’s a model of the SMS in my region that that might be able to play it.  Otherwise, I might be looking to import a new system in the near-ish future.

Asterix and the Great Rescue is something I’ve been on the lookout for since I finished up the first Asterix game for the system a few months ago.  Of those on the Master System, it’s quite a bit more expensive than the others.  There’s also a third game in the series that I have yet to find, but this one I got for a screamin’ deal, about $20 under the regular going rate online.  I really liked the first one I played, and this one looks to be in the same vein in terms of gameplay and graphics.  Now to find the last one to round out the trilogy!  Of all the games I ordered, this one was by far in the best shape of the bunch.  Everything looked nice and crispy!

Last but not least, I found a copy of Ninja Gaiden! This game has been evading me for a very long time and is again one of the more uncommon games for the console from the PAL region.  It usually averages around $110, and I was able to buy it for about half price shipped!  This game is an exclusive on the Master System, and despite not having played very much of this series, I’ve been wanting to give this one a go.  It’s always nice when the price is right.  Woohoo!

I have some other things on their way to me in the mail, but I thought this might be a good place to break up some of the recent purchases.  Hopefully there will be new games just around the corner.

9 Responses to I am a Game Magnet